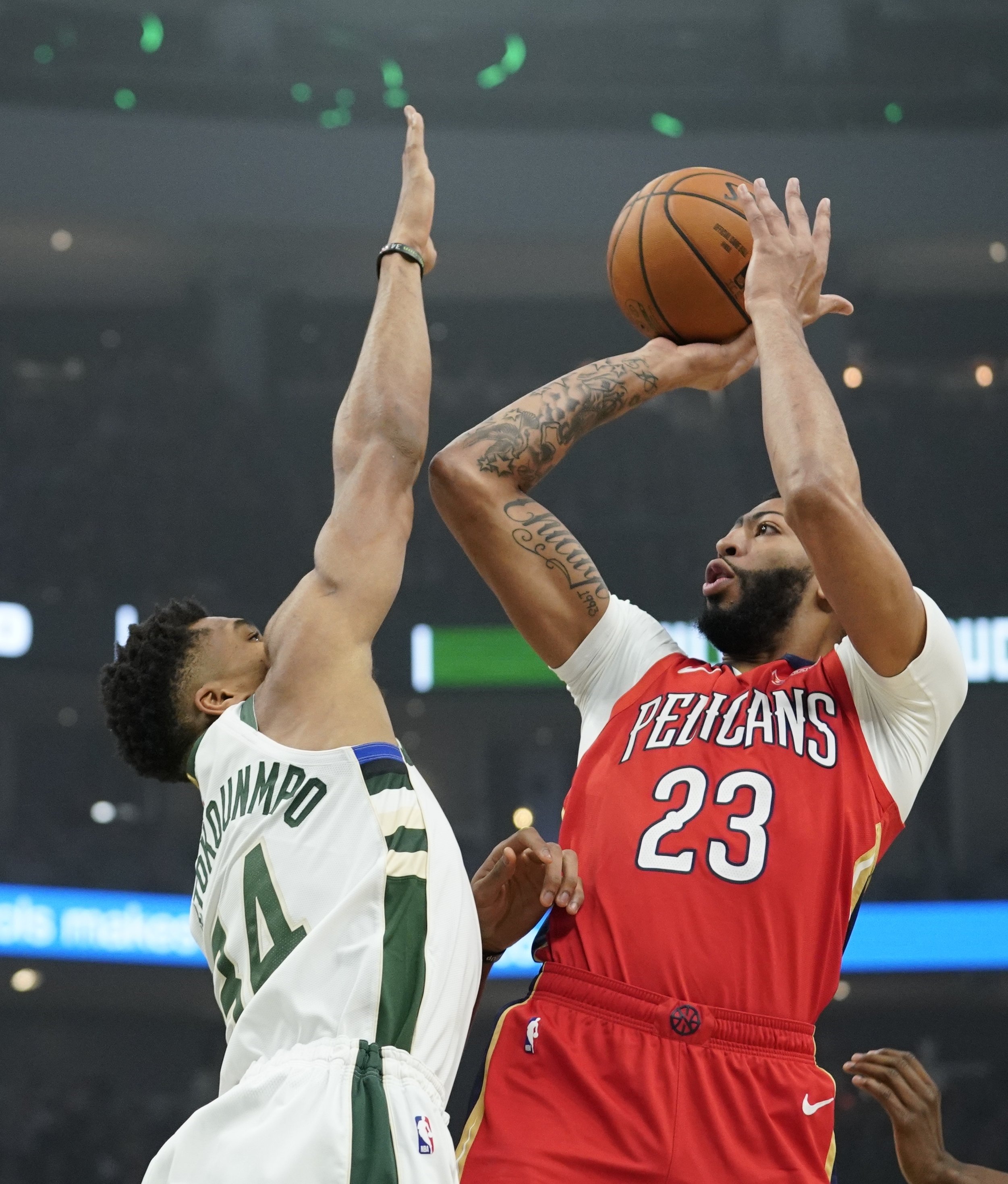 Yet the Pelicans assert Davis won’t be going anywhere until they get a deal they want.

The five-time All-Star has told the Pelicans that he wants to be traded to a championship-contending team and will not sign an extension with New Orleans, agent Rich Paul told The Associated Press on Monday.

ESPN first reported Davis’ demand to be traded to a contender. It is a move that will resonate around the league, one that will have most — if not all — teams trying to see how they can put together a package good enough for the Pelicans to send Davis their way.

“We will do this on our terms and our timeline,” the Pelicans said in a written statement released Monday afternoon, adding that they will only accept a deal that “makes the most sense for our team and it will not be dictated by those outside of our organization.”

The statement also said the Pelicans have asked the NBA to “strictly enforce” any tampering rules associated with any such transaction.

Davis is having the best season of his career, averaging 29.3 points and 13.3 rebounds per game. He’ll almost certainly become a six-time All-Star later this week when the NBA announces the full rosters for this year’s game that will be played Feb. 17 in Charlotte.

Now it’s unclear if Davis will be there as a member of the Pelicans or not. The trade deadline is Feb. 7.

Davis was at the Pelicans’ training headquarters Monday, wearing team gear, working out and getting treatment on the sprained left index finger that has sidelined him four games. He declined through a team spokesman to speak with reporters, but coach Alvin Gentry said after practice that the team understands that Davis’ decision is “part of the business.”

“He plans on playing out the season,” Gentry said. “A.D. is a professional guy and he’s going to play as hard as he can once he gets well and we’re going to do the best we can to try put our team in position to win games.”

Guard Jrue Holiday said Davis has been “like a brother” to him and is “90 percent” of the reason the combo guard decided two summers ago to sign a five-year, $126 million contract to remain in New Orleans.

“It’s the business basketball,” Holiday said, recalling his own trade from Philadelphia to New Orleans in 2013. Holiday said “it felt like everything was close” in Philadelphia, “and all of a sudden, everybody’s gone. … I feel like you kind of have to be able to roll with the punches, be able to adapt and from there play as hard as you can.”

Holiday said attracting players to a relatively small market like New Orleans when a player of Davis’ caliber wants out “can definitely be hard … but I feel like people know our style, the way we play and if they want to be a part of that then they’ll come.”

The Pelicans next play Tuesday at Houston.

In Indianapolis, where Golden State was playing the Pacers on Monday night, the Warriors’ Kevin Durant supported Davis’ trade demand.

“It’s not like the president is shutting down the government. It’s just basketball,” Durant said. “As players, we want guys to do exactly what they want to do in this league. They have a short amount of time. So why not do what you want?”

Davis’ future has long been in question. He’s an elite superstar on a team that hasn’t gotten past the second round of the playoffs since he’s been in New Orleans — and in four of his first six full seasons, the Pelicans didn’t qualify for the postseason at all. They entered Monday 13th in the Western Conference standings, six games out of the final playoff spot with 32 games remaining.

His telling New Orleans that he wants out is the latest power move by a star player who wants to get traded, following a path now similar to what Kawhi Leonard did when he wanted to be traded by San Antonio and what Paul George did when he decided it was time to move on from Indiana. Telling the Pelicans that he won’t re-sign with them provides a blunt message: Move me, or lose me for nothing.

But New Orleans, which controls Davis’ contract through the 2019-20 season, had been steadfast for months, saying it had said they had no desire to move their best player, who is in line to sign a $240 million, five-year extension in 2020.

Trade chatter has ramped up this season, especially after Los Angeles Lakers All-Star LeBron James — who is represented by Paul, just as Davis is — included the New Orleans star on a list of players that he would love to play with. James’ comments were construed in some circles as campaigning for Davis.

Boston would almost certainly be a place that makes sense; the Celtics are a contender and have more than enough assets to make a good deal for New Orleans. But the Celtics cannot trade for Davis under NBA rules until July 1, unless they also trade away Kyrie Irving — which likely won’t happen. Irving is a factor because of what’s known as the Rose Rule, the one that says NBA teams cannot trade for more than one player who has signed an extension.

The Celtics could sign Irving in July and then trade for Davis. But until then, unless they move Irving, Davis won’t be in Boston.

That would point to the Lakers as another possible destination for a trade. The Lakers, right now, aren’t necessarily a contender. But they have James, which probably means they’re attractive to Davis as well. James shrugged off the notion he did anything illicit, saying it’s just common sense that he would like to play with elite players like Davis.

A year ago at this time, the Pelicans had perhaps the most dominant frontcourt in the NBA with Davis lining up with DeMarcus Cousins. Then Cousins tore his Achilles, and wound up signing this past summer with Golden State. The Pelicans responded by opening the season with a surprisingly lopsided victory at Houston and started 4-0 before a series of injuries appeared to undermine them.

It has been an interesting few days for New Orleans sports fans. Saints fans are still reeling from a non-call for pass interference last week that played a major role in their team losing the NFC championship game to the Los Angeles Rams and being denied a Super Bowl berth..

And now, the news only gets worse with Davis declaring he wants out.