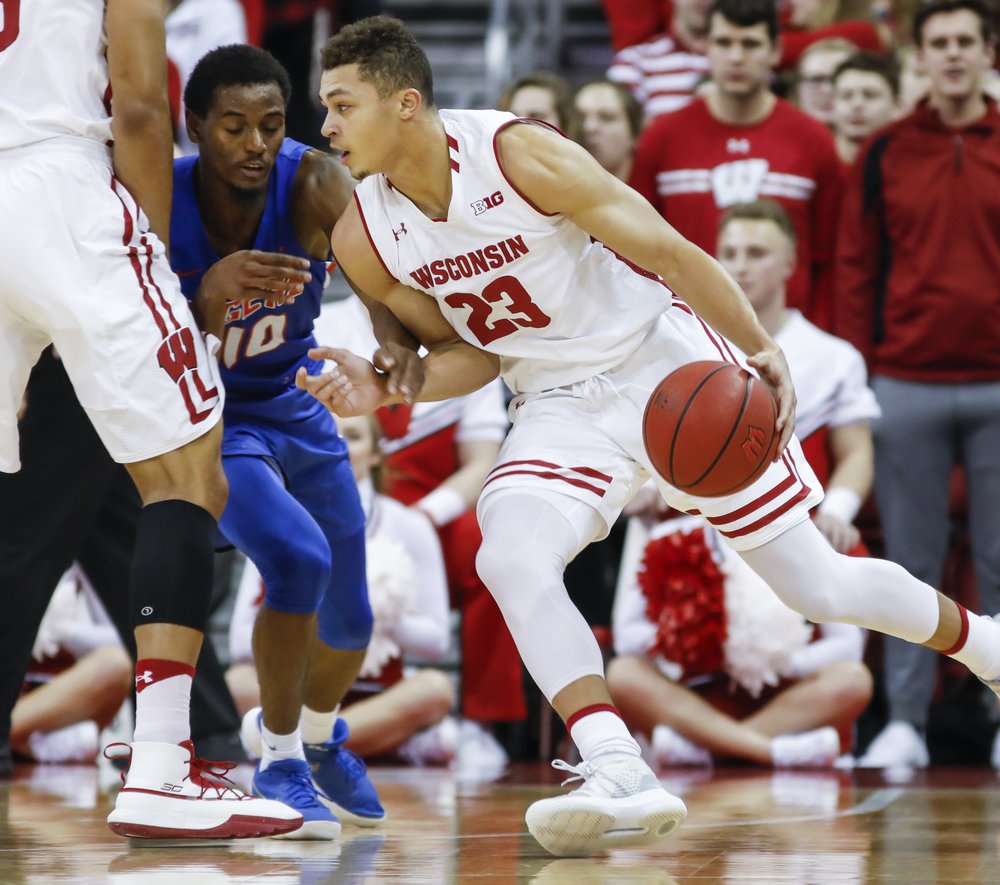 The 16th-ranked Badgers dominated back home against an overmatched team following a seven-game stretch versus power conference foes.

Brad Davison scored a season-high 24 points and Wisconsin had a school-record 69 first-half points to overwhelm Savannah State 101-60 on Thursday night.

La Crosse native Kobe King drew a start and was 4-for-8 from the field and 0 of 3 from beyond the arc in scoring 10 points. The redshirt freshman added three rebounds and an assist in 23 minutes.

It was just the kind of confidence-building rout that Wisconsin needed after 74-69 loss in overtime last week to in-state rival Marquette. That game was also preceded by mostly down-to-the-wire contests against more evenly-matched schools.

The Badgers (9-2) took care of Savannah State in a hurry on Thursday.

Davison was 6 of 9 from 3-point range. Preseason All-American Ethan Happ had 18 points and 11 rebounds, and freshman Tai Strickland added a career-high 14 points.

The Badgers shot 71 percent in the first half to take a 37-point lead on their way to their first 100-point contest since 2013. Savannah State (3-9) is the only team in Division I allowing 100 points a game.

“We try to do it and play the game the right way … that will reinforce (good) habits,” Wisconsin coach Greg Gard said. “We don’t change our demands regardless of scores or opponents.”

Jaquan Dotson had 20 points to lead the Tigers, a team that likes to shoot 3s. Second in the NCAAs in hitting 13 3s a game, Savannah State managed to shoot 11 of 39 (28 percent) from the arc at the Kohl Center.

Strickland’s night exemplified the Badgers’ early fortune after two of his three 3s banked off the backboard.

“It definitely helped me get a lot more comfortable. It’s different from practice where it’s a closed gym,” Strickland said about his 17-minute outing.

Savannah State: The team dressed just eight players, the tallest player being 6-foot-8 Romani Hansen. But 6-6 guard Adam Saeed faced the 6-10 Happ for the opening tip. Allowing foes to shoot 50 percent on the season, the Tigers were routed, as expected. They were also outrebounded 45-20. … Tyrell Harper finished with 11 points and 12 rebounds.

Wisconsin: F Khalil Iverson sat out with a lower left foot injury. Coach Greg Gard said the injury wasn’t serious. He didn’t really need one of his best defenders anyway. … The 11 3s in the opening 20 minutes were a school record for a first half. …. Wisconsin finished the night shooting 47 percent.

At one point, Davison was trapped in the corner in the frontcourt by two defenders before jumping and slinging a pass to Kobe King at the opposite wing. King hit a bucket and drew a foul for a 39-20 lead with 9:25 left in the first.

Later, Wisconsin’s Charles Thomas blocked Romani Hansen’s layup attempt from behind. At the other end, D’Mitrik Trice punctured the undersized Tigers’ zone with a diagonal pass to a cutting Davison for an easy layup and 21-point lead with 8:13 left in the first.

“The only way (the team) can get better is playing against better competition,” Tigers coach Horace Broadnax said. “And it’s a good experience to come in here and play the Big Ten.”

“They got a visual and a good, physical understanding, showing up today (that they’ve) got to work. That’s what they should take away, but social media is going to distract them before they get back to work.” — Broadnax, with a laugh, about the lesson for his players.