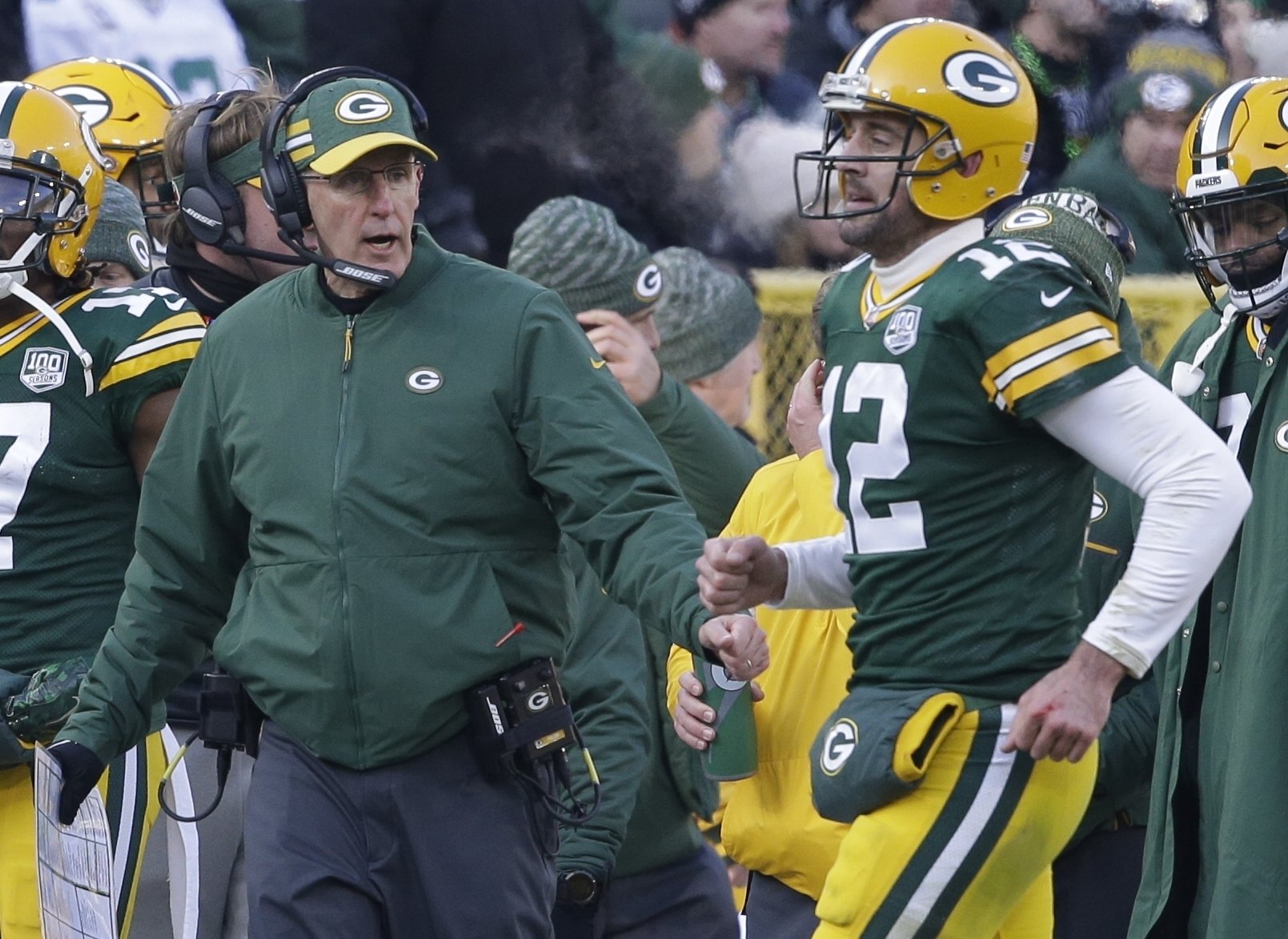 GREEN BAY, Wis. (AP) — A tough week for the Green Bay Packers ended with a sorely needed win that relied on a familiar formula.

They beat a warm-weather team on a chilly afternoon at Lambeau Field by building a big lead and winning the turnover margin.

Aaron Jones ran for a 29-yard score in the third quarter. The defense forced two turnovers — their first takeaways in three games — and limited quarterback Matt Ryan after a game-opening touchdown drive to hand Atlanta its fifth straight loss and guarantee the Falcons a losing record for the first time since 2014.

The Packers (5-7-1) regained some swagger with Philbin taking over for the fired Mike McCarthy. They’ve still got work to do to avoid a losing record, but at least Green Bay snapped a three-game losing streak.

“It was an emotional week, we all know that. I feel very happy for the organization, players and staff that work so hard to make this a unique place,” Philbin said. “I told the team I was very proud to be their head coach today.”

In return, the team gave the game ball to Philbin.

“He’s a great man. I love Joe. I love everything that he’s about, and it was a lot of fun,” said receiver Randall Cobb, who caught a 24-yard touchdown pass with 12:44 left in the third quarter to make it 27-7.

That pass also turned out to be momentous for other reasons for Rodgers, giving him 359 consecutive attempts without an interception to break the league record previously held by New England’s Tom Brady (358 in 2010-11).

Rodgers finished 21 of 32 for 196 yards and two scores. Linebacker Deion Jones had a couple chances to snap Rodgers’ interception streak, but couldn’t hang on either time.

“You need a little bit of good fortune when you have a streak like that,” Rodgers said.

The Falcons (4-9) had trouble keeping up after their first series. When they did, they hurt themselves with eight defensive penalties.

“It’s definitely frustrating, maddening, disbelief, all of those things when we don’t execute on those,” coach Dan Quinn said.

Atlanta found some semblance of a running game that it hoped to get to open up play action. Yet the Falcons still endured a long drought after Ryan found Julio Jones for a 16-yard touchdown pass on an easy opening series.

By the time Ryan and Jones connected for another score, from 12 yards with 13:34 left in the game, Atlanta was still down by 20.

Their frustrating and injury-filled season was epitomized by a botched snap in the red zone later in the fourth.

Atlanta drove to the 8 when the shotgun snap from center Alex Mack hit Mohamed Sanu’s leg while the receiver was in motion. Bashaud Breeland recovered.

“That was tough, but that’s on me,” Ryan said. “The whole operation starts and ends with me, so I’ve got to do a better job of that and making sure that we don’t have things like that coming up.”

He finished 28 of 42 for 262 yards and three scores, connecting with Justin Hardy for a 19-yard touchdown with 14 seconds left. Ryan also tossed a 22-yard interception returned for a score by Breeland in the second quarter.

Ryan was outplayed by Rodgers, who also hurt Atlanta on the ground with trademark scrambles. A scrum broke out in the second quarter after cornerback Brian Poole hit Rodgers as the quarterback slid near the end of a 21-yard run to the Atlanta 27.

Pushing and shoving ensued, with Deion Jones and Packers center Corey Linsley each whistled for offsetting personal fouls. After a sack, the Packers still got a 48-yard field goal as time expired to take a 13-point halftime lead.

Guard Lucas Patrick, one of three backups filling in up front because of injuries, also got physical after Rodgers went down.

“To take a cheap shot, as we felt, I didn’t like that, so I wanted to go down there and let the guy know and kind of lock him up and let him know that’s not going to fly,” Patrick said.

Rodgers was sacked four times, but all four hits came in the first half. Overall, it turned into a good day for the line, even with left guard Lane Taylor (foot), right guard Byron Bell (knee) and right tackle Bryan Bulaga (knee/illness) out with injuries.