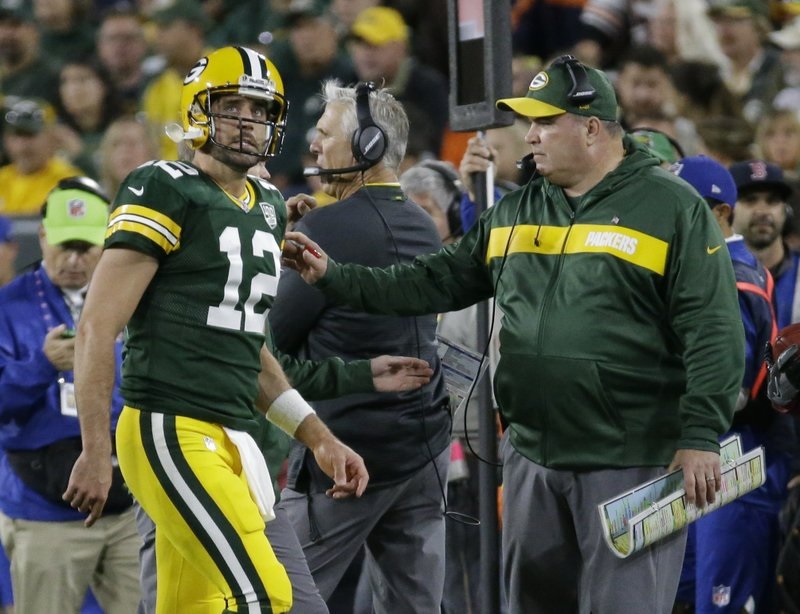 NFL ICYMI: Packers, A-Rod say ‘bye’ to McCarthy; who next?

NFL ICYMI: Packers, A-Rod say ‘bye’ to McCarthy; who next?

There’s little argument that Aaron Rodgers’ talent is such that his Green Bay Packers probably should have won more than one Super Bowl by now.

For quite some time, there have been those who blamed coach Mike McCarthy for the lack of titles more than credited him for steering the team to that title.

Now the world will find out just what Rodgers and the Packers are capable of without McCarthy, who was fired after a 20-17 loss at home to the lowly Arizona Cardinals on Sunday that dropped Green Bay to 4-7-1, its worst start since 2006. It was an abrupt end for McCarthy — who did win a championship, after all — and rare upheaval for a model franchise that last changed coaches during a season 75 years ago.

It’s likely other coaches who are in trouble around the league will get a chance to ride things out through Week 17, but Cincinnati’s Marvin Lewis, Jacksonville’s Doug Marrone, the Jets’ Todd Bowles and Carolina’s Ron Rivera all should be wary. When Rivera was asked whether he’s concerned about his job security after a 24-17 defeat at Tampa Bay dropped the Panthers to 6-6, this was the reply: “I’m not going to address that question. Do not ask that question again, please.”

Rodgers is a two-time NFL MVP, and he was the Super Bowl MVP when the Packers beat the Pittsburgh Steelers in the big game in 2011, all under McCarthy.

Year after year more recently, though, Green Bay would reach the postseason only to wind up with so-close-but-so-far exits.

“We’re just not executing well,” Rodgers said, “and it’s the same things over and over.”

Not long after those words were spoken, team president Mark Murphy released a statement announcing that McCarthy was gone. Offensive coordinator Joe Philbin will fill in.

This season is essentially over; the Packers are a half-game out of last place in the NFC North. Now they can start pondering their future — as can McCarthy.

He likely will get another chance elsewhere. Presumably, Rodgers will be given some input on Green Bay’s choice of a new coach. He turned 35 on Sunday, and the opportunities to win a second Lombardi Trophy are fading.

In case you missed it, here are other top topics after the NFL season’s 13th Sunday:

The league’s handling of Kareem Hunt’s role in an assault of a woman at a hotel in February is under scrutiny after the reigning rushing champion said he was never interviewed by anyone conducting the NFL investigation of the matter. After the Ray Rice case, in which he punched his then-girlfriend (and now wife), the league hired additional staff to handle such inquiries — but all these months later, Hunt was still playing until TMZ Sports posted video from a hotel security camera. And he told ESPN on Sunday that the league hadn’t spoken to him about what happened. Hunt also acknowledged lying about it to the Kansas City Chiefs, who released him.

It was a good day to be a big man in the NFL (as long as winning isn’t the most important thing, that is). Two, um, larger guys got into the end zone: Bears defensive lineman Akiem Hicks, listed at more than 330 pounds, plunged in from the 1 for a score that brought back memories of Chicago’s William “The Refrigerator” Perry.

And, offensive lineman Taylor Decker, who goes 6-foot-7 and about 310 pounds, caught an 11-yard TD pass.

But he just caught a TD pass from Matthew Stafford.

Hicks became the third NFL player since 1982 with a sack and rushing TD in the same game (“Fridge” was one of the others); Chicago also got halfback Tarik Cohen’s 1-yard, tying touchdown pass off a lateral on the final play of regulation, but ended up losing to the New York Giants 30-27 in OT. Decker’s moment of personal glory also did little for Detroit in what became a 30-16 loss to the Los Angeles Rams, who clinched the NFC West.

“This is special but we got more work to do!"

Inside the locker room of your NFC West Champions! pic.twitter.com/1eemF7Yuza

Wacky ending to the night game: There were three offsides calls in a row as Chargers kicker Michael Badgley got three tries to make a game-winning field goal — pushing his initial attempt from 39 yards wide left, then getting blocked from 34, before finally succeeding from 29 (so the last flag for a too-early jump was declined) in a 33-30 victory over the Steelers. The Chargers (9-3) erased a 16-point halftime hole; Keenan Allen caught 14 passes for 148 yards and a TD.