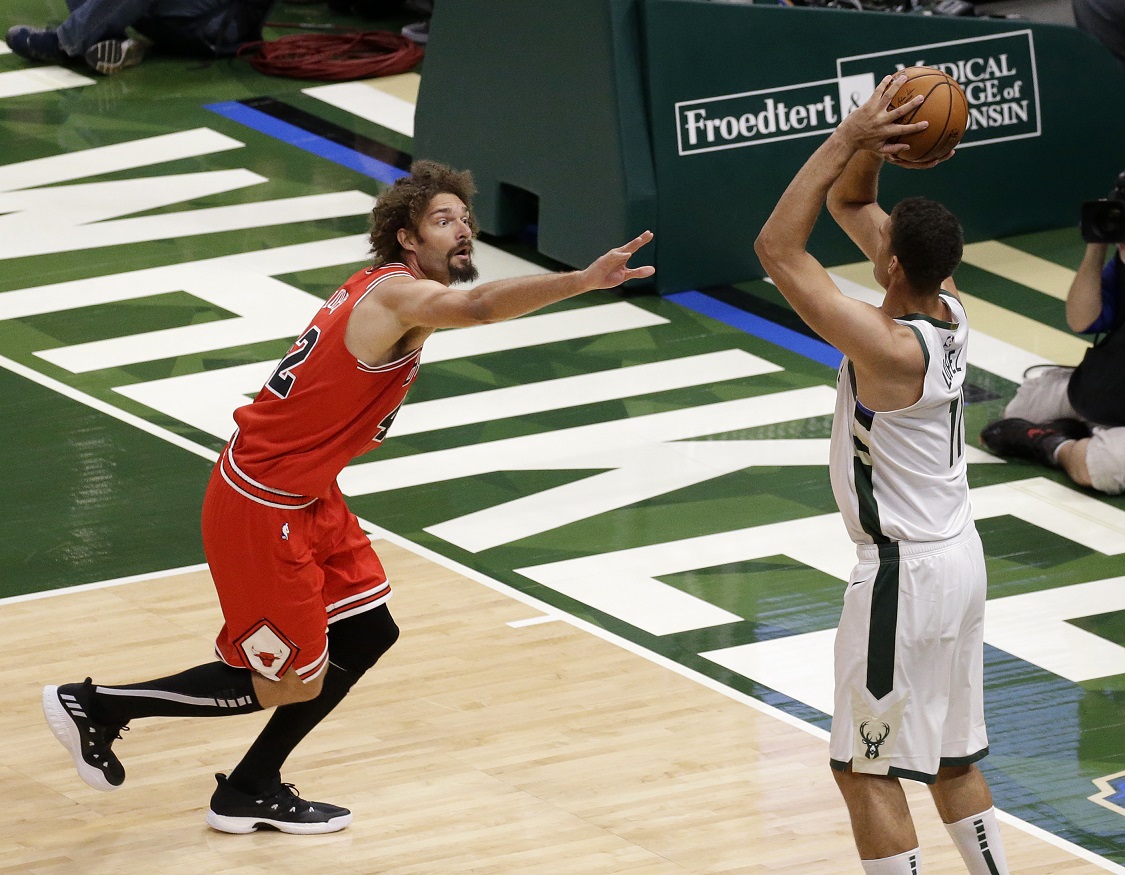 The best 3-point shooter who ever lived, at least in terms of volume, is Ray Allen.

Boston used to have him.

Milwaukee used to have him.

And he doesn’t figure into either franchise’s greatest single-game 3-point barrage.

With NBA records being set from 3-point range this season — Golden State’s Klay Thompson has already busted the mark for 3s in a game with 14, one more than the standard his fellow Warriors sharpshooter Stephen Curry established in 2016, the league is well on its way to making more shots from beyond the arc than ever before.

Now, not even three full weeks into this season, five teams have broken their own franchise record for 3s in a game. The most recent entry into that club was Milwaukee, which connected on 22 3s — on 56 tries, as opposed to 39 from inside the arc — in its 144-109 win over Sacramento on Sunday. The Bucks used 13 players, with everyone trying at least one shot from 3-point range and 11 connecting on at least one triple.

It was the second time this season the Bucks tried more 3s than 2s.

Number of times in Bucks history that happened before this season? Zero.

“We’ll just hopefully keep pushing that record, whatever it is,” Bucks coach Mike Budenholzer said. “See if we can get more. … Good for us to know that we’re pushing that envelope and we want to be great behind that 3-point line.”

The Bucks aren’t alone in their quest for 3-point greatness.

Boston, which has had 3-point stars like Larry Bird, Paul Pierce, Antoine Walker and Allen in its rich history, made a team-record 24 3-pointers last week against the Bucks. The Celtics came into this season with 19 3s in a game being their franchise mark; they’ve made 19 or more twice already this season.

“We took what the defense gave us,” Celtics coach Brad Stevens said after the barrage of 24 3s.

Fueled by Thompson’s 14 3s in Chicago, the Warriors set a team record that night with 24 makes from deep. Atlanta set a team mark with 22 3-pointers against Cleveland, and Utah connected on its record of 19 in a loss to Golden State.

Curry is fifth all-time in 3-pointers made with 2,188. Allen is the record-holder with 2,973, a mark Curry is on pace to get in about two years.

In this NBA, if a team doesn’t score 100 points, they’re not winning.

Then again, getting to 100 doesn’t guarantee anything either.

A six-pack of games to watch this week …

— Minnesota at L.A. Clippers, Monday: Jimmy Butler had the Clippers among those on his radar when this trade saga started.

— Milwaukee at Golden State, Thursday: Bucks have been one of the season’s top early stories, and now get the ultimate test.

— Boston at Utah, Friday: This will be Gordon Hayward’s 262nd time playing in Salt Lake City, and his first in a Celtics uniform.

— Houston at San Antonio, Saturday: Spurs are 14-7 in last 21 with Rockets, and the teams play three times before Christmas.

Now that the Tyson Chandler buyout by the Phoenix Suns has been completed, he’s expected to be on the Los Angeles Lakers’ roster later this week once he clears waivers.

Portland coach Terry Stotts, who was a Dallas assistant when Chandler was with the Maverick s, said it’ll be a good move for the Lakers.

“I like Tyson Chandler,” Stotts said. “Great teammate, obviously that was a few years ago but he impacts the game at the defensive end. He’s a great locker room guy. … He’s all about winning. So, any team that has Tyson is going to be better for it.”