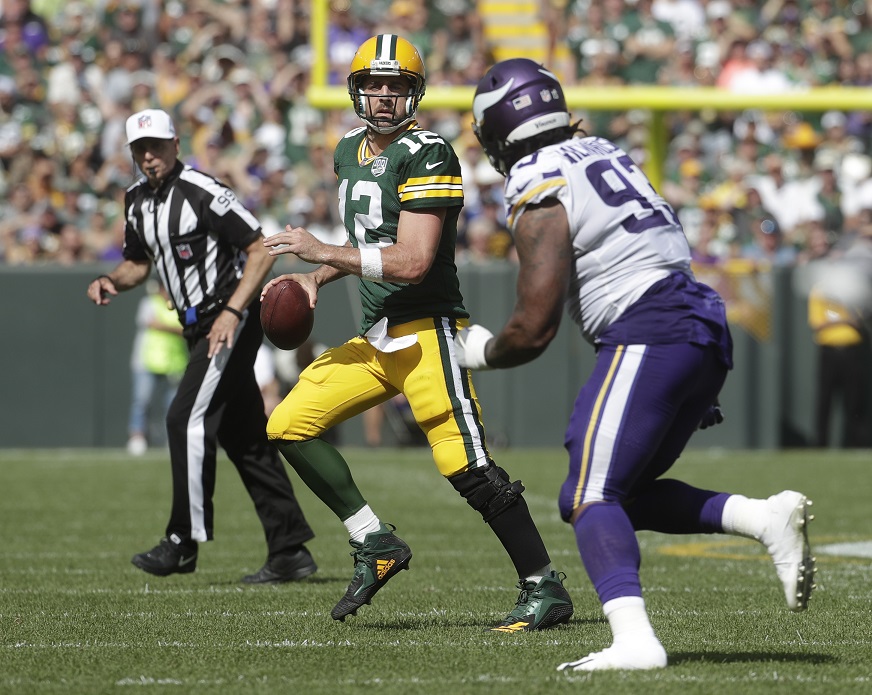 GREEN BAY, Wis. (AP) — Green Bay Packers quarterback Aaron Rodgers hoped to return from the bye week without the brace that has protected his left knee since the second half of the opening game.

Instead, Rodgers was the only player not on the field on Tuesday for the team’s first practice of the week.

While his teammates began preparing for Sunday’s matchup at the undefeated Los Angeles Rams, Rodgers continued to rehab the injury. That’s how he’s started every practice week since sustaining the injury during the second quarter against Chicago on Sept. 9.

Rodgers has played well, despite the injury and reduced practice time. He enters this week’s games ranked 10th in the NFL with a passer rating of 100.1. His 6.5 yards per carry is better than his career-high mark of 6.3 in 2014.

Still, he would like to be fully healthy as the Packers start a critical stretch to the season.

“If I’m completely healed, I don’t need to wear a brace. Feel more comfortable without it, obviously,” Rodgers said. “Having dealt with a knee injury for much of my football life, obviously you’re more protected. You see some guys who do wear it all the time without having issues, but I just feel more comfortable without having it on. So, if it’s not on, that means I’m feeling great and, if it is, that means I’m not quite all the way back.”

Rodgers said he did not have another MRI during the bye to determine how much the knee has healed. Regardless, the break came at a good time for the team and for Rodgers, who has been dealing with other minor injuries. He’s been sacked 19 times.

“It was a great week, nice and relaxing with everything we’re dealing with,” he said. “The knee is an issue but we have other bumps and bruises that aren’t on the injury report because they’re not significant enough. It helps, the week, healing those things up.”

The Packers will need Rodgers at his best as he takes on the Rams. With Los Angeles ranking third in the NFL with 33.6 points per game, Rodgers knows he might have to win a shootout.

Doing so, however, will be difficult against a defense that ranks fourth with 18.3 points allowed per game. Behind Aaron Donald’s four sacks, the Rams had seven sacks in a rout of the 49ers last week.

“You have that chip on your shoulder,” receiver Davante Adams said. “Obviously, we understand why we would be underdogs based on the record and the play style and the way they’ve been playing.

“They’ve been playing some great ball in all three phases, really. So, I saw something where this is like the biggest underdog he’s ever been point-wise. So, that kind of stuff fires guys like No. 12 up and I know it fires me up.”

The challenge won’t get any easier in succeeding weeks. Next, it’s a trip to New England to face the Patriots. After a home game against Miami, it’s back-to-back road games at Seattle and Minnesota. Those five teams are a combined 23-10-1.

“We’re going to have to play a lot better than we have to win those games,” Rodgers said. “This is an important stretch in our season. I’m not going to say it’s going to define our season, but it’s definitely going to shake things out when we get on the other side of this and get back home in six weeks on where we’re at in the race and what we’re playing for.”