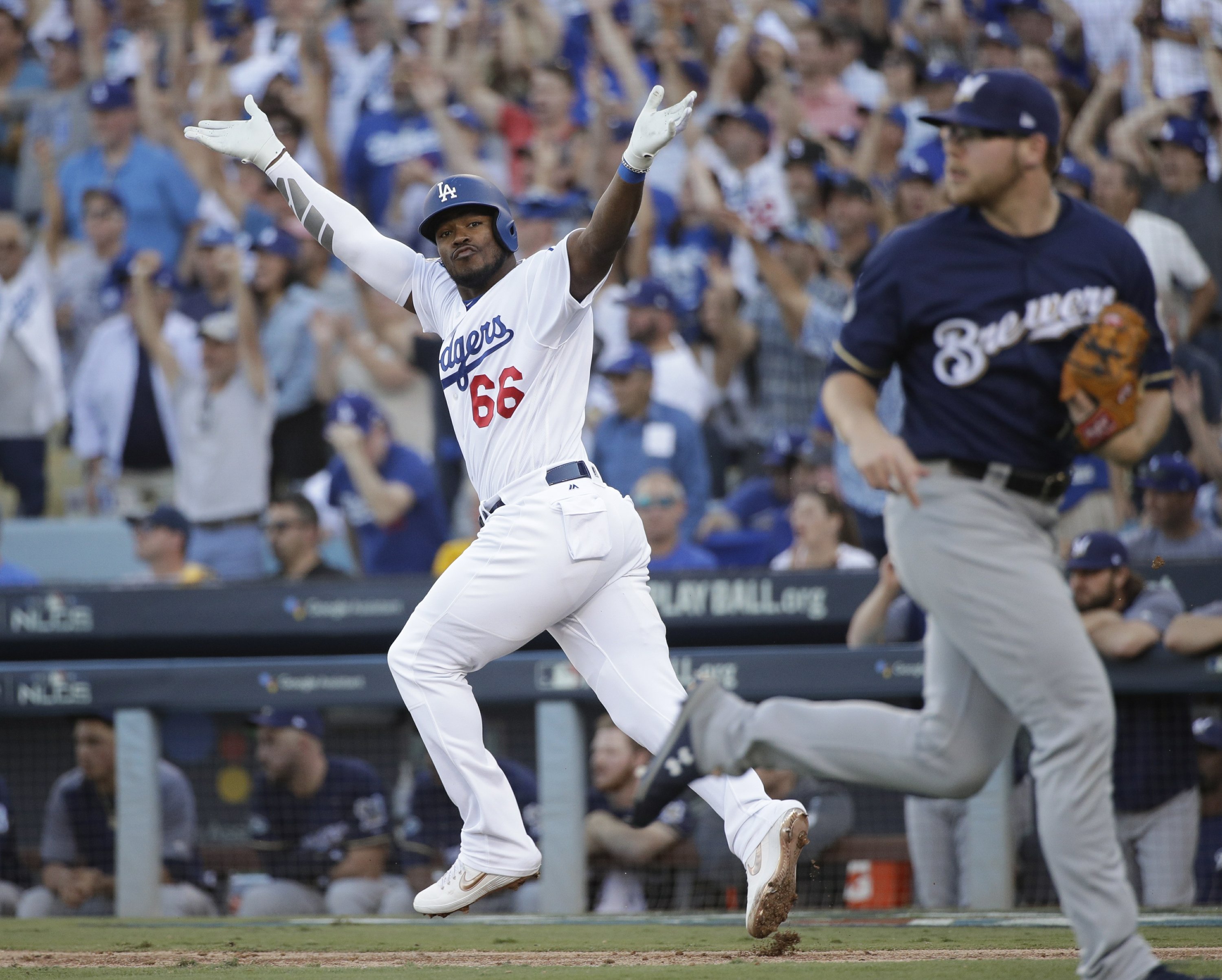 LOS ANGELES (AP) — Clayton Kershaw bounced back from one of his worst postseason starts with one of his best, pitching the Los Angeles Dodgers past the Milwaukee Brewers 5-2 Wednesday to move one win from a return trip to the World Series.

The Dodgers took a 3-2 lead in the NL Championship Series, boosted by Max Muncy’s go-ahead single in the sixth inning. Kershaw held the lead, scoring an insurance run in the seventh and then exiting.

“To go back to Milwaukee up 3-2 as opposed to being down 3-2 is huge for us,” Kershaw said. “It’s been a battle every single game we’ve played them so far and we don’t expect anything different when we go back.”

Game 6 is Friday night in Milwaukee. The Brewers will start left-hander Wade Miley, who walked Cody Bellinger to open Game 5 before getting pulled in an interesting piece of strategy by manager Craig Counsell. Lefty Hyun-Jin Ryu will go for the Dodgers.

“We’re in a good spot, man,” Counsell said. “We’re going back home, to me, in a position of strength.”

The Dodgers haven’t been in back-to-back World Series since losing to the Yankees in 1977 and ’78. They were beaten by Houston in Game 7 last year.

Hit it where they ain’t.

The teams reconvened less than 15 hours after the Dodgers eked out a 2-1 victory Tuesday night on Cody Bellinger’s RBI single with two outs in a 13-inning game that lasted over five hours.

Kershaw was well-rested and masterful in allowing one run and three hits over seven. He struck out nine, all on breaking pitches, and walked two.

Kershaw recovered from the shortest postseason start of his career. He lasted just three innings in losing the NLCS opener while giving up five runs — four earned — at Miller Park.

“I don’t know if it was that much better, just a little bit better execution maybe,” Kershaw said of his repertoire. “Maybe I threw some more curveballs today than I did in Game 1.”

The three-time NL Cy Young Award winner pitched in and out of trouble in the third, when the Brewers loaded the bases and scored their lone run. Kershaw struck out Jesus Aguilar to end the third, the first of 13 consecutive batters that the left-hander retired.

Curtis Granderson hit an RBI double in the ninth. Kenley Jansen, the Dodgers’ third pitcher of the ninth, came in for the last two outs and the save.

Brewers star Christian Yelich, who nearly won the NL Triple Crown this season, was hitless in four at-bats. He is 3 for 20 without an RBI in the NLCS.

The Dodgers’ offense broke loose with five runs over the fifth, sixth and seventh innings that had the sellout crowd of 54,502 on its feet whipping blue towels and cheering loudly.

The team that hit a franchise and NL-leading 235 home runs in the regular season did it playing small ball instead, driving in all but one of its runs on singles.

Tied 1-all, Muncy grounded a 1-2 pitch from Brandon Woodruff into left field, scoring Justin Turner, who led off with a single. Yasiel Puig singled to center with two outs, bringing home Manny Machado after he was hit by a pitch from Corbin Burnes.

Los Angeles extended the lead to 5-1 in the seventh on Turner’s RBI single that scored Kershaw, who walked, and pinch-hitter Brian Dozier’s RBI groundout.

Kershaw has struggled in the postseason during his career, with his numbers never matching his excellence during the regular season.

But his outing Wednesday nearly matched what he did in Game 2 of the NL Division Series against Atlanta. Kershaw allowed two hits over eight shutout innings, struck out three and walked none in the best postseason outing of his career.

The Brewers led 1-0 in the third on Lorenzo Cain’s RBI double to deep center.

Milwaukee had gone scoreless over the final eight innings Tuesday and the first two innings Wednesday.

WORKING WITH A LEAD

GET TO THE ’PEN

Milwaukee’s starters have tossed just 14 innings in the NLCS, the lowest total ever through five games, according to Elias Sports Bureau. The 2008 Dodgers and 1984 Padres share the record for fewest innings by starting pitchers with 21⅓.

The Dodgers were 4 for 13 with runners in scoring position, their most hits in a single game this postseason after going 6 for 30 in the first four games of the NLCS.

Miley will become the first pitcher to start consecutive games for his team in the same postseason since George Earnshaw of the Philadelphia Athletics in the 1930 World Series against the Cardinals, STATS said. He pitched 5⅔ shutout innings in Game 2 vs. the Dodgers, allowing two hits and walking none. Ryu gave up two runs and six hits in 4⅓ innings in that game. Ryu pitched seven shutout innings in Game 1 of the NLDS against Atlanta, allowing four hits and striking out eight.

0
0   0
previous Cain gets Brewers on board first in Game 5 vs. Dodgers
next Wade Miley starting ... again? First player to start consecutive games since the 1930 World Series
Related Posts