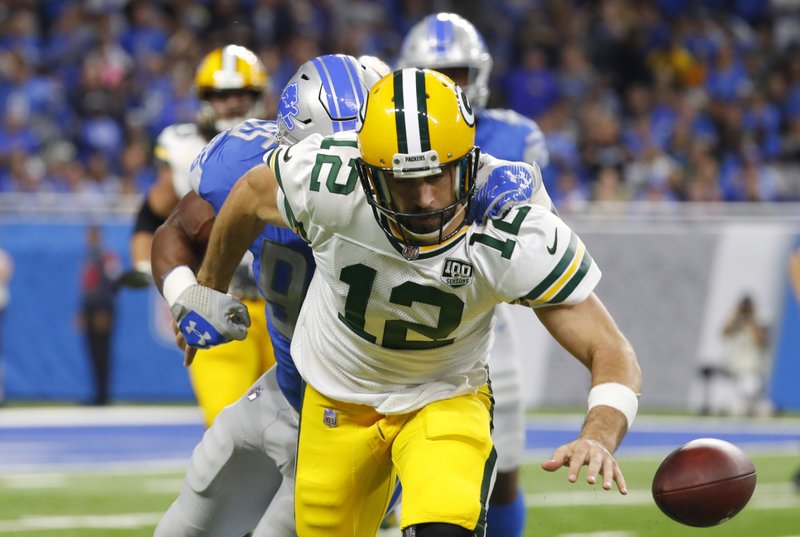 DETROIT (AP) — The Detroit Lions took advantage of some mistakes they forced Green Bay to make and were fortunate some breaks simply went their way.

Matthew Stafford threw two touchdown passes and LeGarrette Blount ran for two scores, lifting the Lions to a 31-23 win over the Packers on Sunday.

Green Bay (2-2-1) was doomed because veteran Mason Crosby had the worst game of his life and two-time NFL MVP Aaron Rodgers lost two fumbles for just the third time in his 14-year career.

“We just couldn’t overcome all the things we did wrong,” Packers coach Mike McCarthy said. “We did some good things in the second half, but you can’t dig yourself that kind of hole.”

Crosby missed a career-high four field goals in one game and failed to make an extra point to boot. He connected on a field goal with 2 seconds left, but that wasn’t of much consolation after his poor performance.

“I look back and I’m thinking, in my childhood, in high school, this is definitely one of the worst ones,” said Crosby, the first NFL kicker to miss four field goals in a game since 2010.

Detroit recovered an onside kick to seal the win, preventing Rodgers from getting another chance at a game-winning Hail Mary in Detroit like the one he threw in 2015.

The Lions built a big lead in the first half, picking up where they left off in their last home game, a 16-point win over the New England Patriots.

Blount had a pair of 1-yard TD runs in the first quarter and Stafford’s 8-yard pass to Marvin Jones late in the second quarter put Detroit up 24-0.

Just wait for the replay…

This @marvinjonesjr TD grab was all sorts of incredible.

Patricia, though, didn’t think the Lions’ cushion was comfortable.

“Unfortunately, I’ve seen that quarterback on the other side there crush a lot of leads pretty quickly and come back,” said Patricia, a former Patriots defensive coordinator.

Stafford answered with a 5-yard TD pass to Kenny Golladay early in the fourth quarter to give Detroit a 31-14 lead.

“It was big to chew up some time to give our defense a little bit of a rest and come away with some points,” Stafford said.

Rodgers connected with Davante Adams on a 12-yard throw for a third TD pass, but Crosby hit the left upright on the extra point to let the Lions keep an 11-point lead midway through the fourth quarter. Adams has scored in 10 straight road games, equaling a league record set by Tommy McDonald of the Philadelphia Eagles from 1959 to 1961.

“We’ve been a one-half team all year,” he said. “We need to do something about that.”

The Lions, who didn’t face Rodgers last year, have won three straight in the series for the first time the 1990-91 seasons.

Detroit had success on defense, going after Rodgers with just four players and dropping seven into coverage. Rodgers held onto the ball to wait for receivers to get open, but they couldn’t, and it led to three sacks and his two fumbles.

“They gave up rushers in order to extend plays, and they got some turnovers out of it,” McCarthy said. “We’re usually successful in those situations, but they did some good things.”

Lions: RB Kerryon Johnson, who ran for 70 yards on 12 carries, went out in the fourth quarter after appearing to hurt his right ankle. CB Teez Tabor (groin) and CB Jamal Agnew (knee) also left the game with injuries.

Lions: Off until playing at Miami on Oct. 21.

0
0   0
previous Packers could be short-handed at receiver against Lions
next McCarthy: Protecting the ball will solve Packers’ woes
Related Posts