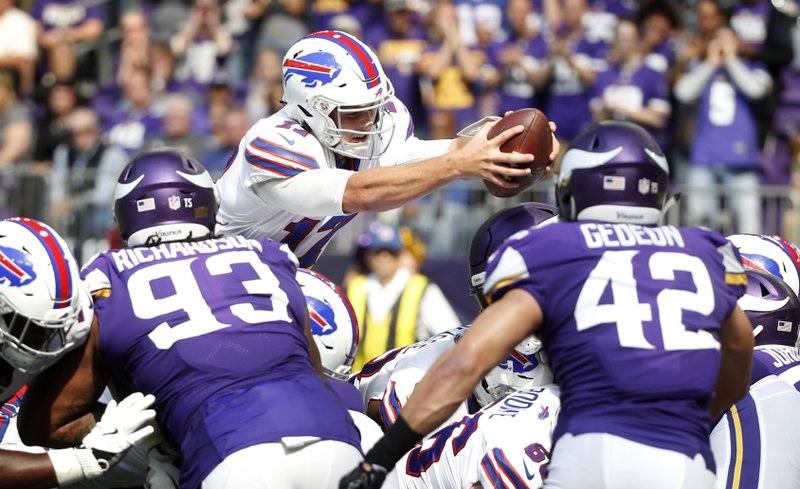 MINNEAPOLIS (AP) — With a boost from an illegal block penalty by the Buffalo Bills during a punt, the Minnesota Vikings finally crossed midfield with 9:36 left in the third quarter.

Their next two plays were an incompletion and an interception.

That was a fitting sequence in a game dominated from start to finish by, not the 16½-point favorite Vikings, but the previously winless Bills in the 27-6 decision .

“I have not lost faith in this football team, but it just shows you every week is a new week,” Vikings coach Mike Zimmer said. “You’ve got to go out and play. Just because somebody says that you’re supposed to win doesn’t mean that’s going to happen.”

The Vikings (1-1-1) have returned from the NFC championship game appearance with again one of the strongest rosters in the league, a desirable mix of experience and potential going on five seasons under the guidance of Zimmer and his staff.

The other reason why the boss didn’t sound worried about his team bouncing back was that he’s seen this type of total-breakdown performance before.

In 2014, after beating Atlanta handily in quarterback Teddy Bridgewater’s first NFL start, the Vikings lost 42-10 at Green Bay four days later with an injured Bridgewater held out. In 2015, they opened the season on the road with a 20-3 defeat by a San Francisco team that finished 5-11.

In 2016, with the playoffs still within reach despite a 1-6 stretch coming out of their bye week, the Vikings lost 34-6 at home to Indianapolis. Then there was the 38-7 blowout at Philadelphia that ended last season one game short of the Super Bowl.

“If we want to get to where we want to be at the end of this, this might be a good thing. A kick in the tail every once in a while helps,” tight end Kyle Rudolph said. “I’m glad this happened in September.”

This was the eighth time in 67 regular-season games under Zimmer the Vikings have lost by 17 or more points. They’ve won three of the follow-ups, but this one is on the road on Thursday night against the unbeaten Los Angeles Rams .

Lost in the shuffle of this one-sided show on Sunday was a sack by blitzing linebacker Eric Wilson on Buffalo’s third play from scrimmage that would’ve forced a punt for the Bills from their 24-yard line.

Wilson had quarterback Josh Allen well wrapped up as he began the takedown, when defensive tackle Linval Joseph joined the effort with a lowered head. The instant his helmet collided with Allen’s, the yellow flag flew into the air.

Aided by another 15-yard personal foul later on the drive by linebacker Anthony Barr for a facemask, the Bills finished the opening possession with a touchdown run by Allen and a lead that was never threatened. The Vikings had six penalties for 59 yards in the first half.

“Penalties are always costly, man, no matter if you get one or however many we had,” linebacker Eric Kendricks said. “First down, second down, third down, it doesn’t matter. They always cost us, and they are not good.”

Though the most devastating developments for the Vikings were the two lost fumbles by Kirk Cousins, triggered by sacks inside their 20-yard line on consecutive drives, the awful afternoon was full of preventable setbacks.

On the last play of the first quarter, Allen was forced out of the pocket by Danielle Hunter on a play-action pass on second-and-17.

Near the sideline, Allen threw back across his body to the middle for running back Chris Ivory and a 55-yard completion . Kendricks followed tight end Charles Clay to the flat, where cornerback Mackensie Alexander also arrived.

Ivory sneaked behind Stephen Weatherly as the defensive end pursued Allen, and nobody was left in coverage.

Nobody was willing to identify which player was at fault, but that was clearly a blown responsibility.

As was the touchdown pass by Allen to tight end Jason Croom earlier in the game, when both Kendricks and cornerback Mike Hughes bit on a fake throw to running back Marcus Murphy. When Murphy motioned toward the sideline before the snap, Kendricks moved left but Hughes raised his hand as if to signal his intent to leave the slot for the flat.

“We did all of the things,” Zimmer said, “that cause you to lose football games.”