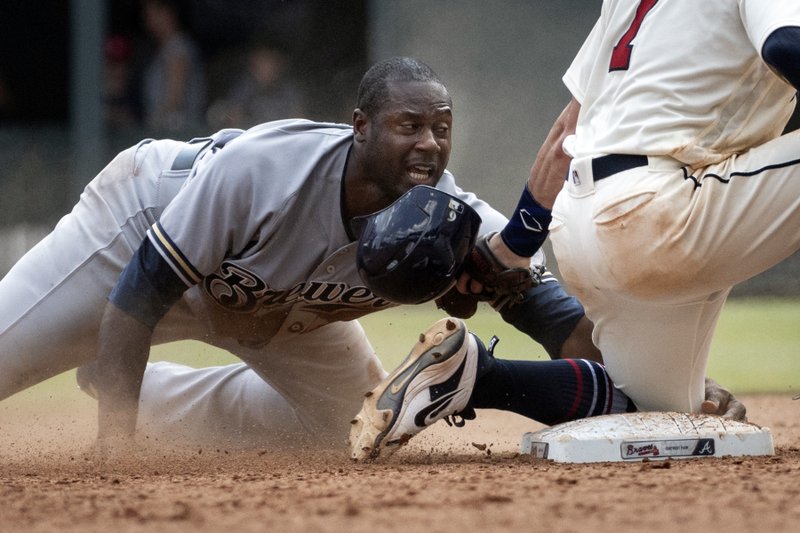 Late Atlanta HR does in Brewers

Late Atlanta HR does in Brewers

ATLANTA (AP) — As he watched hitter after hitter reach base for Milwaukee, Brian Snitker felt like his Braves were always behind.

Instead, Atlanta stayed close despite being outhit 19-9 and took advantage of Ozzie Albies’ tiebreaking homer in the seventh inning to beat the Brewers 8-7 on Sunday.

“At one point of the game I felt like we were about eight runs down,” Snitker, the Braves’ manager, said.

Albies’ homer was one of three hit by Atlanta. Ronald Acuna Jr. and Dansby Swanson added two-run shots for the Braves, who took two of three in a matchup of playoff contenders.

The Brewers had two or more hits in each of the first seven innings.

“It was tough when they keep getting hits but we have to keep fighting through it and that’s what we did today,” Albies said. “We never give up.”

Jesus Aguilar drove in four runs with three hits, including a three-run homer , for Milwaukee. The Brewers left 13 runners on base to only four for the Braves.

“It was a crazy game,” Brewers manager Craig Counsell said. “When you strand 13, you always think you’ve left runs out there.”

The Brewers’ inability to deliver with runners on base reached a peak in the seventh. Facing Jonny Venters (2-1), Ryan Braun hit into a bases-loaded double play to end the inning.

Albies gave Atlanta the lead by lining his 21st homer over the left-field wall on a slider from Dan Jennings (4-4) to lead off the seventh.

Milwaukee also left the bases loaded in the fourth.

A.J. Minter pitched the ninth for his 10th save in 11 chances. Eric Kratz hit a one-out single before Lorenzo Cain, who had four hits, flied out. After Kratz moved to second on a wild pitch, Minter struck out Christian Yelich to end the game.

After allowing only one earned run in three straight starts, Sean Newcomb lasted only four innings, giving up five runs on 12 hits and two walks. The left-hander was tagged for a combined 10 runs on 17 hits in 7 2/3 innings in two starts against the Brewers this season.

Brewers: RHP Kyle Davies (right shoulder) will join the Brewers in Chicago, but will make at least one more minor league rehab start after permitting four runs in five innings for Double-A Biloxi at Tennessee on Saturday. … RHP Taylor Williams (right elbow) had what Counsell called a “positive” bullpen session and could come off the 10-day DL without a minor league rehab. … C Manny Pina left the game one inning after being hit by Freddie Freeman’s foul tip in the fifth.

Braves: LHP Sam Freeman (left shoulder inflammation) reported to Class A Rome. Freeman had a 5.45 ERA in 49 games when he was placed on the 10-day DL on July 30.

Anderson, who took a .088 batting average into the game, enjoyed a rare hitting highlight. He slapped a 0-2 pitch from Newcomb up the middle for a two-run single in the second. He also drove in two runs against the Cubs on Sept. 9, 2017.

The temperature for the first pitch was 86, and each starter struggled with humid conditions. Snitker noticed Newcomb frequently grabbing handfuls of dirt on the mound. Anderson had similar problems.

“I couldn’t get my hand dry the first couple of innings,” Anderson said. “I couldn’t figure that out.”

Brewers: Following an off day on Monday, RHP Jhoulys Chacin (11-4, 3.91) will start when Milwaukee opens a two-game series at the Cubs on Tuesday. Chacin struck out while pinch-hitting for Anderson in the fifth.

Braves: RHP Touki Toussaint is expected to be recalled from Triple-A Gwinnett to make his major league debut in the first game of Monday’s split doubleheader against Miami. Toussaint, 22, joins Mike Soroka and Kolby Allard as first-time starters for Atlanta this season. RHP Mike Foltynewicz will start the night game.