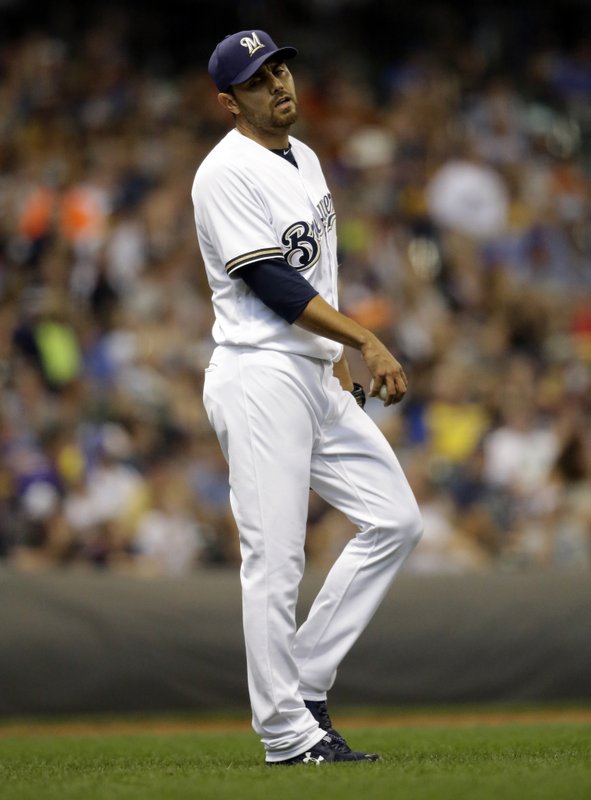 MILWAUKEE — Hunter Renfroe hit a go-ahead grand slam in the ninth inning, his fourth straight game with a home run, and the San Diego Padres rallied for an 8-4 victory over the Milwaukee Brewers on Thursday.

The Padres trailed 4-2 entering the ninth, but rallied against Brewers relievers Corey Knebel and Joakim Soria.

Knebel walked the bases loaded and allowed a run-scoring infield single to Travis Jankowski before Soria entered to try to escape the jam.

Soria retired Eric Hosmer before Renfroe hammered a 1-2 pitch deep into the left-field bleachers for his grand slam.

Franmil Reyes added a solo homer to right off Jacob Barnes to cap the Padres’ stunning six-run rally. The Padres, who went 5-20 in July, won four of seven games against the Chicago Cubs and Brewers on their Midwest road trip.

Milwaukee finished a 3-3 homestand and dropped two games behind the first-place Cubs in the National League Central Division race.

Padres reliever Kirby Yates (4-0) pitched a scoreless eighth for the victory and Craig Stammen closed it out with a scoreless ninth.

Padres lefty Robbie Erlin was coming off an impressive victory over the Cubs last week, but could not duplicate that success. He allowed all four runs — two earned — and seven hits in five innings.

Brewers second baseman Jonathan Schoop, acquired from Baltimore before the trade deadline, was 3 for 26 with his new team when he hit a two-run double down the left-field line in Milwaukee’s three-run fourth inning. The hit broke a 1-1 tie.

Schoop scored the third run of the rally when he raced home from second base on Lorenzo Cain’s grounder that was misplayed by Padres shortstop Freddy Galvis.

The Brewers took a 1-0 lead on an unearned run in the second. Schoop reached on a fielder’s choice grounder and advanced on a throwing error by Padres second baseman Jose Pirela.

San Diego missed a chance for a big inning in the fourth after tying the score on Pirela’s one-out RBI single. Guerra struck out A.J. Ellis with the bases loaded and induced Erlin to hit into a forceout to end the threat.

Galvis hit a two-out solo home run to right field in the sixth to cut the Padres’ deficit to 4-2.

Brewers: RHP Zach Davies will make a rehab start for Double-A Biloxi at Tennessee on Saturday. Davies is recovering from shoulder and back injuries and has not made a start for Milwaukee since May 29 against St. Louis.

Brewers: RHP Freddy Peralta (5-2, 3.54 ERA) will make his 11th start and second against the Braves as Milwaukee opens an eight-game road trip. He is coming off an 8-4 victory over Colorado on Saturday.

Braves: RHP Kevin Gausman (5-9, 4.47 ERA) was acquired in a trade deadline deal with Baltimore and lost his Braves debut on Aug. 4, a 3-0 defeat to the New York Mets. He allowed three runs and six hits in five innings.