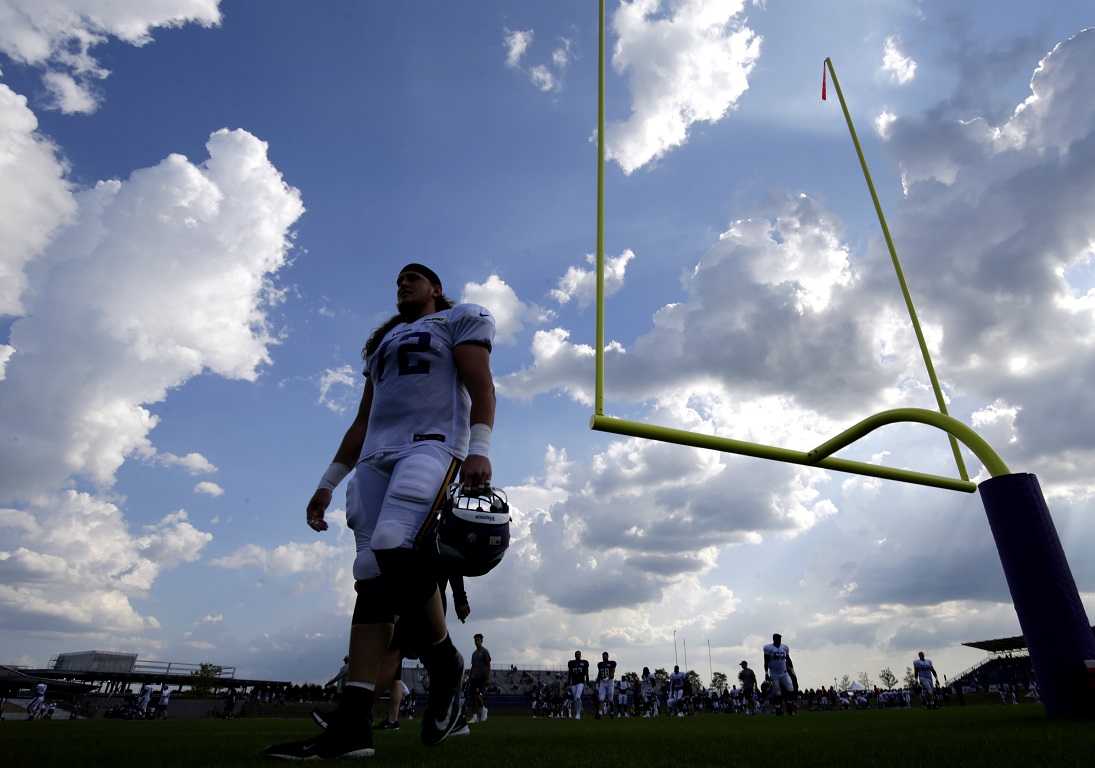 EAGAN, Minn. (AP) — Already owning one of the strongest defensive lines in the league, the Minnesota Vikings have made another addition to their front four this summer.

He even was a former first-round draft pick.

Anthony Barr has established his place as the strong side linebacker, an integral part of coach Mike Zimmer’s pressure-driven scheme. This switch is not by any means complete or permanent, considering the value Barr has given the Vikings while rarely missing a snap in the middle of the defense with former college teammate Eric Kendricks. With Brian Robison capably spelling Everson Griffen and Danielle Hunter at the defensive end spots, there’s not a glaring need for one.

Sliding Barr and his athleticism and speed to the front, though, provides yet another way Zimmer and the Vikings can attack an offense.

“Definitely, it could be a change-up for us,” Barr said. “Hopefully I can get a couple more opportunities to do that, and we’ll see where it goes. It’s something I’m going to continue to work on and get better at. I’m excited for it.”

The Vikings have used passing-situation packages this offseason that include cornerback Terence Newman at safety while making Harrison Smith a hybrid linebacker. Put Barr at defensive end, and Everson Griffen can move inside. Or Barr could simply line up as a fifth down lineman. Either way, that’s the potential for quite the fierce pass rush.

Barr has taken plenty of turns with the defensive linemen during individual drills in training camp so far, evidence that this is more than just a token experiment.

“It’s a conscious effort in getting him into rush situations where he knows what to do,” Zimmer said. “I really don’t have any concerns when he’s rushing on a back, but sometimes when he gets on a bigger stronger guy and gets in certain positions, he has to know what to do.”

Barr was the first player the Vikings drafted after hiring Zimmer in 2014, the ninth overall selection out of UCLA who spent only two years with the Bruins on defense after beginning his college career as a running back. With 10½ sacks, six forced fumbles, four fumble recoveries and one interception over four seasons, Barr has left himself plenty of room to improve on such modest statistics. There are many more ways to contribute than those basic measurements, of course, but Zimmer’s matter-of-fact assessment in 2016 that Barr “has a tendency to coast a little bit” still hovers over his trajectory.

Across the NFL, Barr is known mostly for his hit on Green Bay Packers quarterback Aaron Rodgers in the sixth game of the year that led to a broken collarbone and set the NFC North rivals on opposite courses in 2017. Interestingly, referee Pete Morelli told reporters at Minnesota’s practice facility on Thursday that the league’s stricter rules about targeting defenseless players would now make that play a 15-yard penalty.

Barr is the only core player left on an expiring contract, with extensions recently signed by wide receiver Stefon Diggs, defensive end Danielle Hunter and Kendricks. Barr’s salary for 2018 is a little more than $12.3 million, and he hinted at disappointment when spring practices began without a new deal. He didn’t address the subject in his first remarks to reporters at training camp.

“My focus is here at camp, getting better with the team, and we’ll let that figure itself out,” he said.

If this defensive end thing works well, Barr’s price will only go higher.

“I’ll never talk business out in the open or in public,” general manager Rick Spielman said. “I’ll just tell you he fits everything that we want as a Minnesota Viking.”