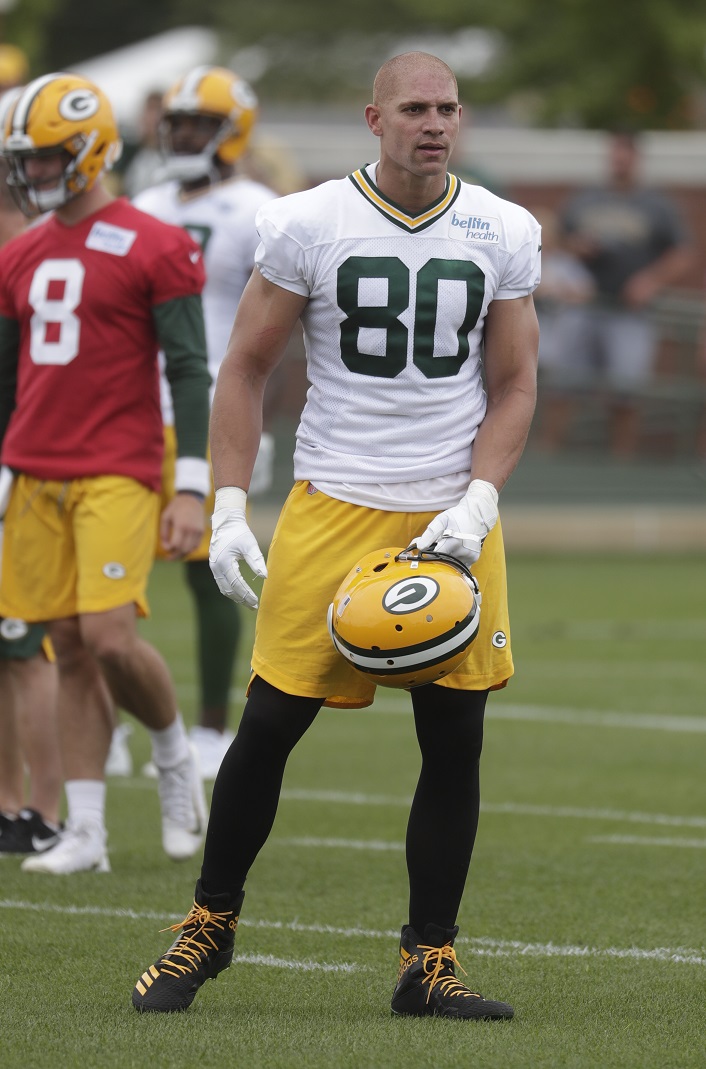 But when will Graham know that he and Rodgers have truly gotten on the same page?

“I’ll be with the ball in the end zone,” Graham said after Saturday’s first in-pads practice of camp. “That’s really when you know.”

That hasn’t happened yet in any of the 11-on-11 team periods of the first three practices, but the two have connected plenty of times during drills and expect to be on the same wavelength in time for the Sept. 9 regular-season opener against Chicago.

The Packers certainly need Graham, a five-time Pro Bowl tight end who came over from Seattle in free agency, to be a force. After cutting wide receiver Jordy Nelson during the offseason, they’ll be counting on Graham to be a go-to presence in the red zone. Last year with the Seahawks, all 10 of his touchdown catches came from inside the opponent’s 20-yard line.

Coach Mike McCarthy’s offense is at its best when he has a big, athletic tight end in the mix, which is why the team has signed one three years running – Jared Cook in 2016, Martellus Bennett last year and Graham this time around. While the Bennett experiment backfired, Rodgers and Cook developed a strong connection during their one season together after Cook overcame early-season injury problems.

“We just need more reps,” Rodgers said of his exposure to Graham. “He’s a big target, he catches the ball with his hands. We haven’t had a guy like that around here in a while. Obviously Jared did a lot of those things, but Jimmy, he’s got a great feel for coverages, getting open, he uses his body really well, runs good routes. And he’s a matchup issue. We haven’t had a consistent matchup issue guy like that for a long time.

“So we just need reps together. He needs to hear the language, he needs to hear some of the code words and the verbiage and the signals. I’m not worried about any chemistry issues with him.”

Graham, who played with elite-level quarterbacks with the Saints (Drew Brees) and Seahawks (Russell Wilson), has been impressed with Rodgers’ accuracy and his ability to put the ball in places that protect his receivers from dangerous hits. To Graham, having that type of trust already with Rodgers is a very encouraging sign.

“I know when leads me out there that I can just run right through it. I’ve got no worries in the world because I know he’s the eyes in the back of my head,” Graham said. “We’ll just keep working on that. It’s not him getting on my page, it’s me getting on his page, you know? He’s been in this league a long time, knows too much, and I’ve got to just catch up and just learn every day and make sure I’m supposed to be where I’m at so I can make that catch and make that big play.”