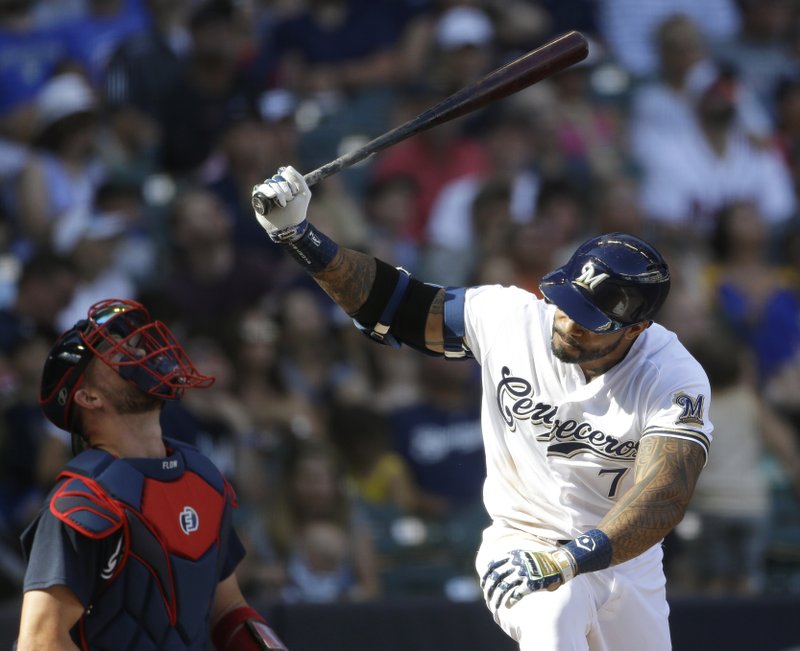 Sanchez pitched effectively into the seventh and Freddie Freeman added three hits, lifting the Atlanta Braves to a 5-1 win over the Milwaukee Brewers on Saturday.

“I know the potential for this team to be in the playoffs is really high,” Sanchez said. “I’ve been in October games. I can bring a lot of things to October.”

Sanchez (4-2) retired 19 in a row at one point to help snap Atlanta’s season high four-game skid. The veteran right-hander exited with two outs in the seventh after being hit by a liner on his right side near his hip. A red welt was visible on his back, but he said afterward he was fine.

“He never throws a pitch I don’t think that he doesn’t know where he wants to put it,” Braves manager Brian Snitker said.

Sanchez struck out six in a row at one point. But after two easy outs in the seventh, his day ended quickly following a walk to Hernan Perez.

Perez stole second, and Brad Miller’s line drive deflected off Sanchez and out of shortstop Dansby Swanson’s reach to cut Atlanta’s lead to 2-1.

Sanchez didn’t appear too shaken up — smiling and getting high fives from the Braves dugout after exiting. Reliever Dan Winkler came in and recorded the final out of the inning.

Sanchez allowed one run off two hits and a walk. He finished with eight strikeouts.

“It’s fun to be able to play behind that,” Swanson said. “He’s been tremendous.”

His original flight was delayed after getting called up from Triple-A Colorado Springs, so he instead traveled from Colorado Springs to Houston then Chicago. He arrived in Milwaukee at 3:30 a.m. on Saturday.

Wilkerson (0-1) had taken the rotation turn of Brent Suter, who went on the 10-day disabled list with left forearm tightness on Friday.

Johan Camargo’s two-run single off Wilkerson gave Atlanta the lead in the first. Wilkerson allowed two runs off four hits and three walks in five innings. He struck out five.

Freeman and Nick Markakis added consecutive run-scoring triples in the eighth as Atlanta scored three times in the inning to put the game out of reach.

Freeman came into the game in a slump, batting .159 over his last 17 games before his three-hit performance.

“I’m starting to feel a little better,” Freeman said. “I’m seeing pitches, not swinging at balls in the batter’s box. That helps.”

Sanchez benefited from a heads up defensive play from Markakis in right field in the first inning. With runners on first and second, Travis Shaw flared a ball that should’ve loaded the bases.

Instead, Jesus Aguilar, at first, didn’t read the play quickly enough and Markakis fired a strike to Swanson at second base for the first of Sanchez’s 19 straight outs.

“Travis hit a ball that Aggie just didn’t get a good read on,” Brewers manager Craig Counsell said. “That was our opportunity against Sanchez, for sure.”

Braves: Rookie LF Ronald Acuna Jr. was out of the lineup after leaving with left groin tightness on Friday night.

Brewers: CF Lorenzo Cain (left groin strain) is close to returning from the 10-day disabled list and could be activated as soon as Sunday. … LF Ryan Braun was a late scratch in the starting lineup with tightness in his right side, but pinch hit in the ninth. … RHP Jorge Lopez was recalled for the fifth time this year to provide pitching depth. Infielder Nate Orf was optioned to Triple-A Colorado Springs.

Braves: LHP Sean Newcomb (8-3, 3.10 ERA) looks to bounce back Sunday after allowing five runs without getting out of the third inning in an 8-5 loss to the Yankees on Tuesday. RHP Junior Guerra (5-5, 2.87) goes for Milwaukee and is holding opponents to a .217 average in 16 starts this year.

0
0   0
previous Five-run third all Brewers need for fifth in row
next Aguilar moves into NL lead with two homers, as Brewers down Braves
Related Posts