Home NEWS MLB BREWERS Chacin is back, as Brewers win fourth in a row in a battle of first-place teams 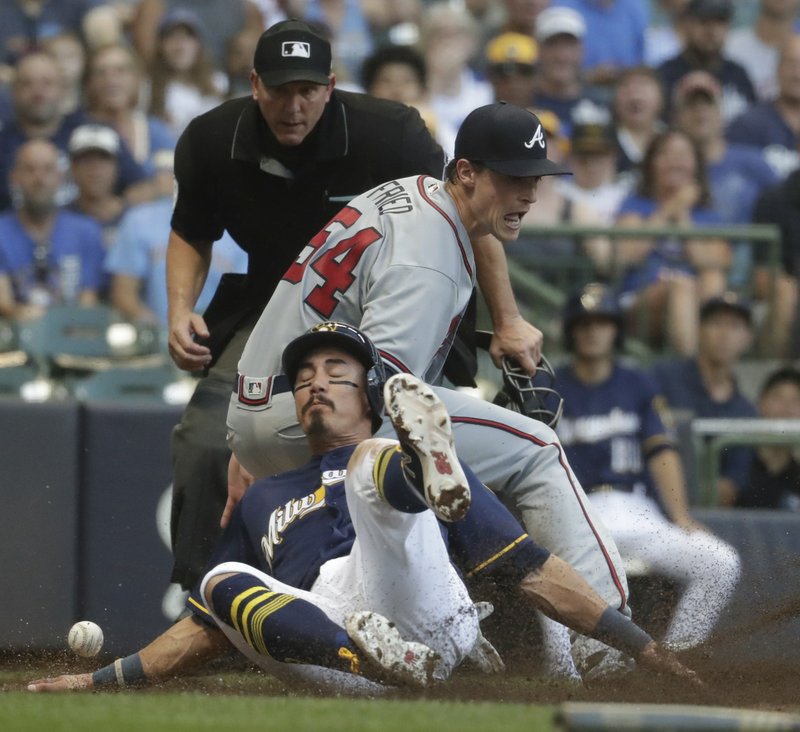 Chacin is back, as Brewers win fourth in a row in a battle of first-place teams

Chacin is back, as Brewers win fourth in a row in a battle of first-place teams

Trailing 2-0 after the first three batters of the game, Chacin threw seven solid innings and Hernan Perez homered among his three hits, leading the Milwaukee Brewers to a 7-2 victory over the Atlanta Braves on Thursday night in a matchup of first-place teams.

Chacin (7-3) gave up three hits and two earned runs while matching a season high with seven strikeouts in what tied for his longest outing this year. The right-hander, who was 0-2 in his previous three starts while allowing 10 runs in 15⅔ innings, retired 20 of the last 24 batters he faced.

“Jhoulys pitched excellent — after the first,” Milwaukee manager Craig Counsell said. “He locked it in and made some really good pitches the rest of the night.”

Dan Jennings pitched two perfect innings for his first save this season, and second of his career.

NL East-leading Atlanta dropped its third consecutive game after winning four straight – and lost for the first time this season on a Thursday (7-1).

Braves left-hander Max Fried (1-3) lasted only three innings in his third start of the season, giving up four earned runs and four hits with three walks.

“He had a blister starting and he’s had a history of the blister thing,” Atlanta manager Brian Snitker said. “And when it kind of surfaced, I decided I didn’t want to take any chances, so I shut him down.”

Atlanta gave Fried a 2-0 lead in the first, but he allowed a run in the bottom of the frame and did not help his cause in the second. After a leadoff triple by Perez and a walk to Keon Broxton, Milwaukee tied it at 2 on a single by Tyler Saladino. Fried failed to hold the runners on first and second by not even looking at them, so Broxton and Saladino converted a double steal. Erik Kratz’s groundout scored Broxton to give Milwaukee a 3-2 lead.

“We’re getting the right guys out there, trying to do our homework and find spots when we can take advantage of something,” Counsell said.

Then, Fried not only walked Chacin, he fired a wild pitch that bounced off the backstop on ball four. Catcher Tyler Flowers retrieved the ball and threw to Fried covering the plate. But Saladino – who appeared to be an easy out – slid awkwardly in front of the plate and knocked it out of the pitcher’s glove. Saladino got up and stepped on the plate for a 4-2 lead.

Perez hit a two-run homer – his fifth – off reliever Dan Winkler in the eighth.

In the first, Ozzie Albies scored from third on a grounder hit by Freddie Freeman. Chacin fielded the ball, looked at Albies and then slowly lobbed a high toss to first which allowed the speedster to score without a throw home. … In the eighth, Winkler’s pickoff attempt at first hit Jonathan Villar in the head and the ball ended up in Milwaukee’s dugout for an error. Villar took second and scored on a single by Christian Yelich.

Braves: RHP Julio Tehran is not in Milwaukee after coming down with an illness while the team was in New York. Since he was not scheduled to start against the Brewers, the Braves sent him back to Atlanta.

Brewers: INF Saladino (left ankle sprain) was activated from the disabled list and INF Eric Sogard was designated for assignment.

0
0   0
previous Broxton with, perhaps, catch of the year, as Brewers make MLB Twitter history
next Five-run third all Brewers need for fifth in row
Related Posts