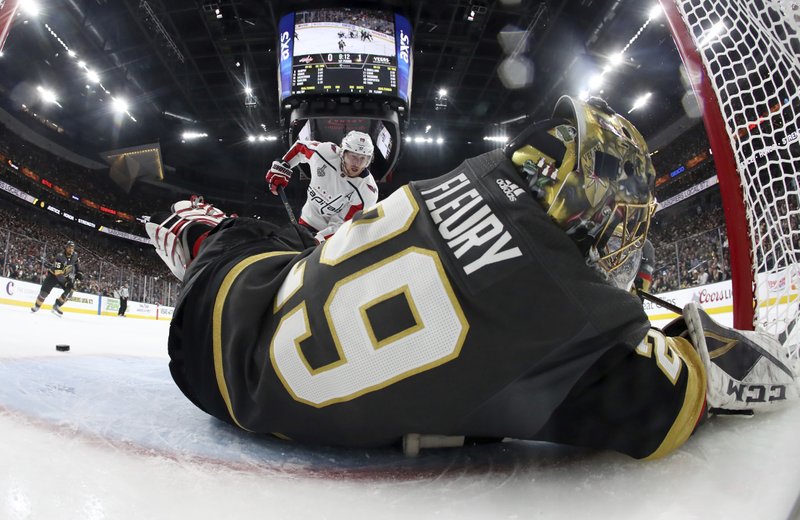 LAS VEGAS (AP) — Golden Knights coach Gerard Gallant for months talked about his team’s hard work, ability to battle and their devotion to playing a full “200 feet of hockey.”

In pockets of Game 2 in the Stanley Cup Final on Wednesday night, the Golden Knights were surprisingly outworked, outbattled and outhustled in losing 3-2 to the Washington Capitals. Game 3 is Saturday night in Washington and Vegas is going to need to up the energy level even further in a frantic series with scoring chances galore.

Vegas outshot the Capitals 39-26, but the hustle stats in Game 2 went to Washington, which handed the expansion club just its second home loss of the postseason. Washington had 18 blocked shots to eight for Vegas, helping goaltender Braden Holtby turn things around. He allowed five goals in the opener but was sublime in Game 2 as he made 37 saves — none bigger than stopping Alex Tuch with the paddle of his stick in a sprawling move with just 1:59 left.

Washington also showed its mettle on the penalty kill, limiting the Golden Knights to a single goal in four attempts — including a 5-on-3 on the third period.

And while Washington outhit the Golden Knights, 46-39, it was some of Vegas’ bigger hits that ignited the Capitals in the second period.

Washington coach Barry Trotz didn’t provide an update on his star afterward, but said it was the key moment in the game for his team.

“It galvanized us as a group, I think it might be a turning point for us,” Trotz said.

With Kuznetsov out, Trotz added Nicklas Backstrom to his top line with Alex Ovechkin and Tom Wilson. And 5:38 into the second period, with the game tied at 1-all and the Capitals on a power play, Ovechkin scored his first career Stanley Cup Final goal to give the Capitals the lead.

Vegas unraveled and gave up more uncharacteristic chances in front of Marc-Andre Fleury, who has yet to lose consecutive games this postseason. The Golden Knights also had 12 turnovers compared to Washington’s four.

“We shot ourselves in the foot a few times with some turnovers,” Golden Knights defenseman Nate Schmidt said. “At the end of the day you really have got to see where your game is at. If you look at it as a whole, we played really well for parts of the first period and we got caught up in the transition game in the second period — and that’s not the game we want to play.”

Instead, Washington fed off the momentum and dictated the tempo, and a little less than four minutes after Ovechkin scored, Brooks Orpik broke a 220-game goal drought with the eventual game winner. It was his first goal since Feb. 26, 2016.

“I haven’t yelled that loud for someone to score a goal since Ovi scored one of his milestones,” Washington forward T.J. Oshie said.

Though the Golden Knights outshot Washington 15-6 in the third period, the Capitals skated faster, competed better, worked harder and played smarter to steal home-ice advantage with their first-ever Final win. The Capitals return to Capital One Arena, where they have just a 4-5 record in the postseason. Vegas is 6-2 on the road in the playoffs.

0
0   0
previous Serena’s ‘Wakanda-inspired’ bodysuit about more than fashion
next Arcia, recalled from minors, comes through for Brewers with tiebreaking RBI
Related Posts