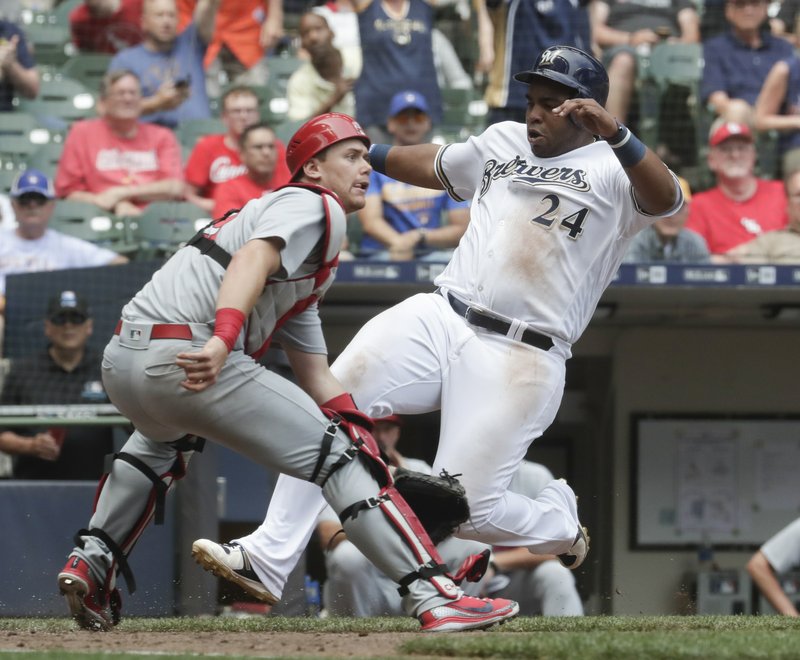 Arcia, recalled from minors, comes through for Brewers with tiebreaking RBI

Arcia, recalled from minors, comes through for Brewers with tiebreaking RBI

MILWAUKEE (AP) — It was a memorable return for Alex Reyes. Same for Orlando Arcia, albeit for much different reasons.

Reyes pitched four scoreless innings for St. Louis in his return from Tommy John surgery, but Arcia hit a tiebreaking RBI single in Milwaukee’s two-run seventh, scoring Jesus Aguilar (above) the Brewers held off the Cardinals for a 3-2 win on Wednesday.

The other run in that inning came on a Christian Yelich homer (below).

Put the ball on the tee for @ChristianYelich?

Might as well just ask for another ball. pic.twitter.com/nBUVJVFmof

Making his first major league appearance since Sept. 29, 2016, the 23-year-old right-hander allowed three hits, struck out two and walked two. He worked out of a bases-loaded jam in the second.

Fatigue was a bit of a factor for the rookie.

“Not necessarily in the second, more in the third,” he said. “I felt a little fatigue. I try not to think about it much when I’m out there.”

Cardinals manager Mike Matheny noticed a change and went out to check on Reyes in the fourth.

“Saw a drop in velocity,” Matheny said. “Needed to go out check out, see what was going on. He said it was nothing that he didn’t normally feel. It was just something that got us concerned.”

Reyes was done after throwing 73 pitches, 42 for strikes.

“Obviously, we’re going to be extra cautious with him,” Matheny said.

Reyes was 4-1 with a 1.57 ERA two years ago, striking out 52 in 46 innings. He felt pain during a pre-spring training bullpen session in February 2017 and was operated on by Cardinals physician Dr. George Paletta.

Reyes went 3-0 in four minor league injury rehabilitation starts this month at Class A Palm Beach and Peoria, Double-A Springfield and Triple-A Memphis. He struck out 44 in 23 innings.

“This was the first time he’s had to work,” Matheny said. “All those minor league rehab starts he had barely had anybody on base. So, he had to bear down. Didn’t give up any runs. His stuff looked right. His stuff looked good.”

Arcia was recalled from Triple-A Colorado Springs. He was sent down to work on his batting and was surprised at being recalled so soon.

“Things weren’t going my way and they wanted me to go down there to work on my hitting and reset everything.” Arcia said through a translator. “Thankfully, things were starting to go a lot better.”

He looked pretty good in the seventh. With two out and runners on first and second, Arcia stopped a 0-for-15 slide with a base hit against Sam Tuivailala (1-1).

Jeremy Jeffress (5-0) got the win despite allowing two runs in the top of the seventh. Josh Hader struck out the side in the eighth and got two outs in the ninth, and Corey Knebel struck out Jose Martinez for his fifth save in seven chances.

Milwaukee went 1-for-10 with runners in scoring position, but the NL Central leaders still improved to 19-8 in May, setting a team record for wins in the month. Harrison Bader homered for St. Louis, and Dexter Fowler had three singles.

Reyes was reinstated from the 60-day disabled list. Right-hander Mike Mayers was optioned to Memphis, and right-hander Dominic Leone was transferred to the 60-day DL. Leone has been out since May 5 with right upper arm nerve irritation.

Cardinals: Fowler returned to the starting lineup after missing three games with a bruised right knee. He was hit by a pitch Saturday at Pittsburgh. … LF Marcell Ozuna was a late scratch and replaced by Tyler O’Neill. Ozuna pinch-hit in the ninth and walked.

Brewers: SS Tyler Saladino (left ankle sprain) was placed on the 10-day DL. He got hurt Tuesday night. Eric Sogard started in his place, and Arcia took over in the seventh.