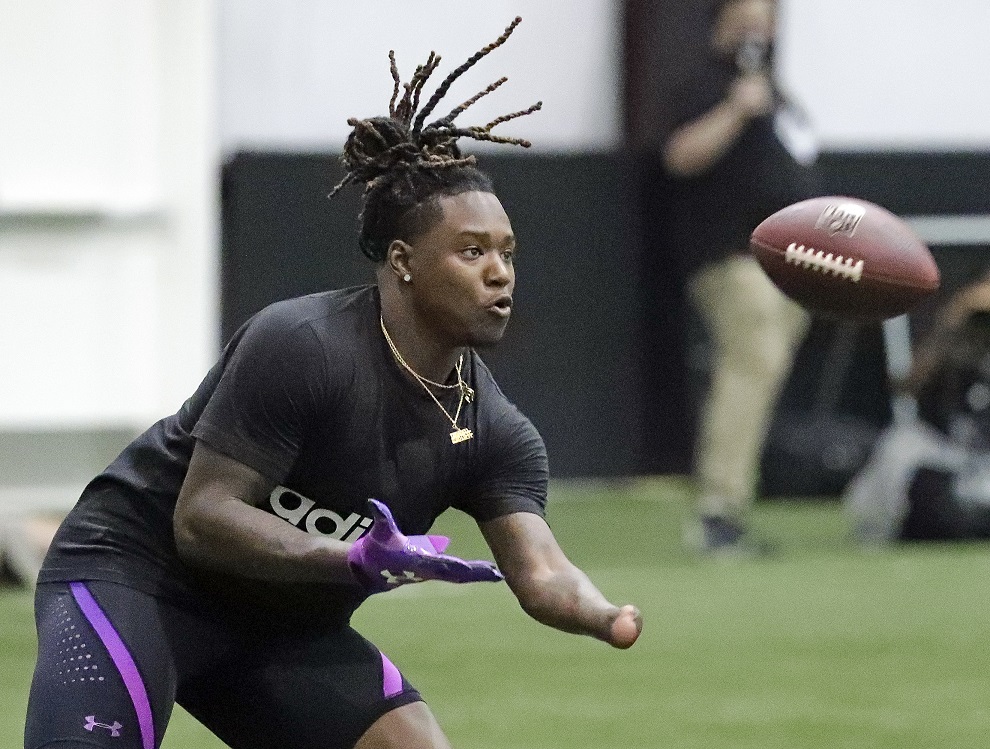 Players in attendance not selected in the first two days of the NFL draft usually head out of town before the fourth through seventh rounds.

Griffin, who sat through 100 names being called in the first three rounds, wasn’t in AT&T Stadium on Saturday.

Then he was after Seattle spent the 141st overall selection on the Central Florida linebacker who has no left hand.

Griffin, whose left hand was amputated when he was young, has become the feel-good story this year and one of the most popular players in this draft because of his perseverance, outgoing personality and, of course, his talent.

“I mean that was amazing,” Griffin said. “To even have an opportunity to come back, I didn’t think I was going to be able to come back and do it … I don’t remember seeing too many people who have left and came back.

“That was the most amazing experience of my entire life. Me thinking about it, that moment, to be up on that stage and having the crowd go crazy, it was like we had won the Peach Bowl all over again. It was nuts.”

Griffin helped UCF go undefeated last season, then blew through the NFL combine with a 4.38 in the 40, sensational lifting work with his prosthetic, and a can-do attitude.

Exactly the sort of player the Seahawks seem to find; they drafted his twin brother, Shaquill, out of UCF last year.

“It’s been a really good experience,” Shaquem said. “I would have been crazy to turn an experience down like this. I’m just glad I was one of the selected few to be here.”

Griffin had one of the more unusual ways of finding out he was chosen.

“I was using the restroom and my brother came and tackled me with my cellphone, saying ‘answer it, answer it,’ and I looked, and that’s when tears started pouring down,” Griffin explained.

“I literally went to use the restroom and that’s when my brother busted in and tackled me. I think I was more scared of him tackling me in the bathroom and not knowing what was happening than anything.”

Griffin received, by far, the biggest cheers of the day — louder even than when the Cowboys’ selections were announced. And he made a promise: “Great things are coming to Seattle.”

Griffin’s selection early in the fifth round enlivened a day in which most picks are relatively unknown or obscure players. Not all, though.

Michigan defensive tackle Maurice Hurst was taken one spot in front of Griffin by Oakland. The All-American would have gone much earlier, but a heart condition was discovered at the combine, dropping him far down draft boards.

He had 5½ sacks as an interior rusher and led all nose tackles and defensive tackles with 49 total quarterback pressures, according to Pro Football Focus.

“It’s tough thinking that you’re one of the top players in the draft and having good tape and everything like that, just having to wait,” Hurst said. “You believe you’re better than guys who go ahead of you is tough. I’m just happy to be in the right place and a great organization.”

As for his health, “I’m ready to go right now.”

Another All-American, Iowa linebacker Josey Jewell, was taken by Denver at No. 106. He’s not considered quick, but he is active and seemed to be in on every tackle for the Hawkeyes.

“A lot of that is instincts. A lot of film watching for me,” he said. “It really helped me because I did not run the fastest time ever, not even close. I had to be able to make up from somewhere else.”

—Michigan State extended its streak of having at least one player selected to 78 years when Brian Allen went to the Rams early in the fourth round. Only Michigan and USC have longer streaks, both extended to 80 years during the first two days of the draft.

—The Giants took the first quarterback of the third day, Richmond’s Kyle Lauletta at No. 109. The Giants passed on trying to get their quarterback of the future to replace Eli Manning in the first round, taking running back Saquon Barkley at No. 2 overall. Lauletta doesn’t have a big arm, but he showed good athleticism and accuracy playing at the FCS school.

—Dallas acquired wideout Tavon Austin from the Rams in a trade Saturday.

—Cleveland used a fourth-round pick, No. 105 overall, to take one of the draft’s most talented but troubled wide receivers: Florida’s Antonio Callaway. He had multiple suspensions while playing with the Gators, missing all of last season because of his part in a credit card fraud scheme.

When Callaway plays he is a deep threat receiver and dangerous return man, but he could be the next Josh Gordon, who has had many off-field issues and NFL suspensions with the Browns.

—Wisconsin tight end Troy Fumagalli, who is missing the index finger on his left hand, went to Denver in the fifth round.

—Three punters — yes, three — were taken in the fifth round.

Michael Dickson, the Australian from the University of Texas, was picked 149th overall by Seattle. Alabama’s JK Scott was drafted 172nd overall by Green Bay, a pick before Oakland took Johnny Townsend from Florida. Townsend was the NCAA leader last season with a 47.5-yard average on his 64 punts.

In 1988, there were three punters selected in the first 102 picks. Tom Tupa, who also went 4-9 as a starting quarterback during his 16 NFL seasons, and Greg Montgomery were both taken in the third round and became All-Pro punters. Barry Helton was a fourth-round pick.

One more punter, Logan Cooke of Mississippi State, was chosen by Jacksonville, and the only placekicker taken was Jason Sanders of New Mexico by the Dolphins.