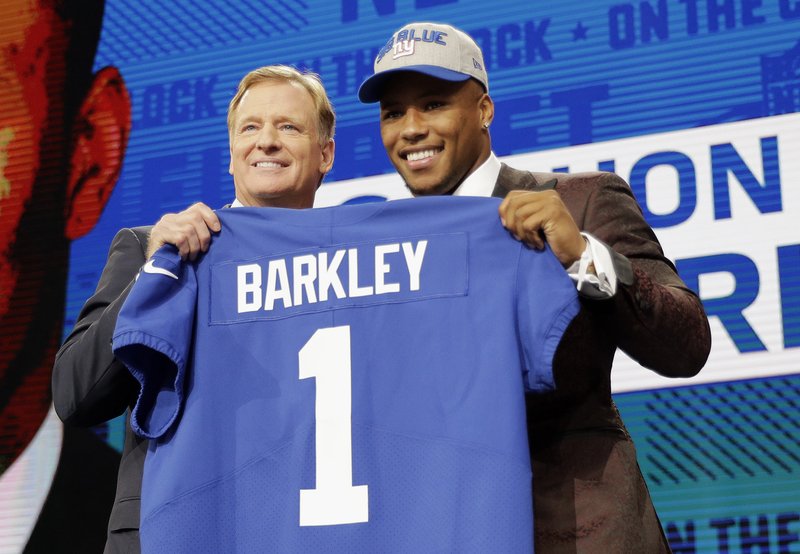 ARLINGTON, Texas (AP) — Quarterback desperation means NFL teams can’t pass on taking a passer — even a flawed one — in the draft.

The Browns, Jets, Bills and Cardinals heeded that notion Thursday night, even as more highly rated players at other positions remained on the board.

Heisman Trophy winner Baker Mayfield became Cleveland’s latest attempt to find its franchise quarterback. Sam Darnold of Southern California is trying to revive the Jets, while in upstate New York — where the Bills gave up on Tyrod Taylor — the future belongs to Wyoming’s Josh Allen. Just after Buffalo traded up to grab Allen, Arizona moved up to get UCLA’s Josh Rosen, a potential replacement for the retired Carson Palmer.

Four quarterbacks in the first 10 selections. Never mind that the best players were considered Penn State running back Saquon Barkley (second overall to the Giants) and North Carolina State defensive end Bradley Chubb (fifth to Denver). The last pick of the first round was a fifth quarterback: 2016 Heisman winner Lamar Jackson, chosen by Baltimore.

In today’s NFL, it’s all about the QBs. Even though none of these is considered a sure success.

“They all had something, a knock on (them),” Bills general manager Brandon Beane said. “We just think (Allen’s) makeup is going to help him work on his flaws. That’ll be part of our job here to accentuate his strengths.”

Same deal in Cleveland, the Meadowlands and the desert.

The Browns’ nearly two-decade search for that quarterback led them to Mayfield. Until the last few days, the Oklahoma product was considered a longshot to be the top pick. He goes from a former walk-on to No. 1 overall. Mayfield is the first Heisman recipient taken first in the following draft since Cam Newton went to Carolina in 2010.

Mayfield, who could sit behind the newly acquired Taylor, joins a team that went 0-16 in 2017.

“I’m going to come in with the mindset to compete and the hunger to learn” from Taylor.

The Browns, who haven’t had a top-flight quarterback since returning to the league in 1999, were sold on his leadership skills and creativity inside the pocket and outside.

“With Baker Mayfield, we have a guy who loves the game of football, who is an ultra-competitor, is revered by his teammates and anybody who has ever been around him,” Browns GM John Dorsey said. “He’s a guy that has earned everything he has ever had since high school to college and now up here. He is a winner, he’s competitive.”

He was not at AT&T Stadium, leaving Commissioner Roger Goodell on stage, hearing cheers cascade throughout the building after announcing the Browns’ choice. It was one of the few times Goodell heard cheers.

Goodell is despised in Dallas after he ruled that Cowboys running back Ezekiel Elliott should be suspended for six games last season for violating the NFL’s personal conduct policy.

More booing accompanied the next pick, but not for Goodell: Dallas’ archrival the New York Giants chose Barkley, considered the best talent in this year’s class. It capped quite a few days for Barkley, whose girlfriend gave birth to a baby girl earlier this week.

“I’ve been able to be accepted into the fatherhood and have my first child, my daughter,” he said. “From here on now, I’ve got to do everything to represent her and try to set an example for her, for the good things I do and the mistakes I make in my life that she can learn from.”

Darnold, pegged by many to be the top pick for months, went third to the other New York team. The Jets had traded with Indianapolis, going from sixth to third with the expressed intent to find a passer.

“I think whatever the coaches want me to do, if they want me to sit, want me to play, I’ll do my role,” he said.

Buffalo traded up with Tampa Bay to get Allen at No. 7. Allen is considered the passer with the most upside.

“Well, we’re going to find out in a few years if this class will pan out,” Allen said. “I definitely think it will. I want the most success for these guys, except when they’re playing me.”

Although Allen played against smaller schools and had issues with completion percentage, his arm strength, size (6-foot-5, 225 pounds) and leadership skills won over the Bills. Their hope is he becomes the next Jim Kelly, a Hall of Famer from the renowned 1983 class that had six first-round quarterbacks.

“He can make all the throws and all that type of stuff,” Bills coach Sean McDermott said of Allen. “Certainly, as we know, no one’s perfect. If you take the right approach, the right attitude, you can get a chance to improve the right areas.”

The bartering wasn’t over. Arizona, also in a QB quandary, moved from 15th to 10th, trading with Oakland, for Rosen. Many NFL personnel people believe Rosen is the most ready to play next season. The Cardinals also signed former Vikings quarterback Sam Bradford.

“Today I think was an indication of how we felt about Josh Rosen, trading from 15 to 10 and in our opinion grabbing one of the best players in this draft, a guy who’s got great intangibles, a three-year starter, a two-time captain, and in my opinion one of the most mechanically sound quarterbacks to come out in some time,” GM Steve Keim said.

Rosen said he was annoyed to slip down.

“I was really angry teams were passing on me, and I was honestly expecting to get picked at some point and have to fake a smile and go up there and pretend to be happy,” he said. “But for some reason when I got picked, all of that went away and that it just went to straight excitement and relief.”

One more QB deal finished the round. Super Bowl champion Philadelphia traded the 32nd spot to Baltimore, which took Louisville’s Jackson, an entirely different QB than incumbent Joe Flacco. While Flacco is a stationary picket passer, Jackson’s athletic skills, speed and running ability were enticing to GM Ozzie Newsome in his final draft before retiring.

The rest of the top 10 was Ohio State cornerback Denzel Ward, fourth to Cleveland; Chubb, considered the best pass rusher, to Denver at No. 5; Notre Dame guard Quenton Nelson sixth to the Colts — won’t Andrew Luck be smiling about that; Georgia linebacker Roquan Smith, eighth to Chicago; and Notre Dame tackle Mike McGlinchey, a somewhat surprising ninth to San Francisco.

Teams shuffled spots deep into the first round, with 11 picks involved in deals Thursday night.

Brothers were selected in the same opening round for the first time: Virginia Tech linebacker Tremaine Edmunds to Buffalo and older sibling Terrell, a Hokies defensive back, to Pittsburgh. The Steelers’ pick was announced by linebacker Ryan Shazier, who suffered a severe back injury last season and underwent surgery on Dec. 6. Shazier limped slowly on stage with help, drawing loud applause from the audience.

There were 22 underclassmen selected, with the Southeastern Conference having 10 players chosen. There were 15 on defense and 17 on offense — with the five QBs matching the 1999 haul and one short of the first round in 1983 that produced Hall of Famers Kelly, Dan Marino and John Elway.