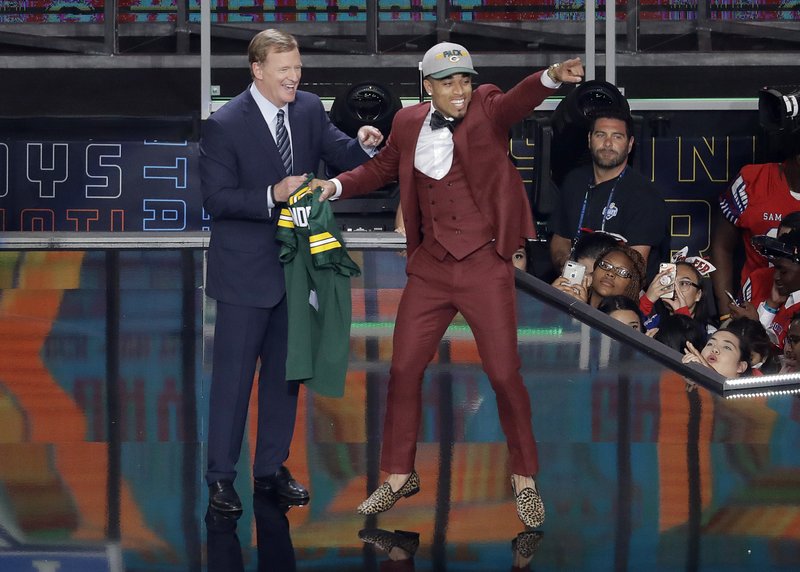 GREEN BAY, Wis. (AP) — The Packers drafted what they needed most: a cornerback.

But what Green Bay also got by selecting Louisville’s Jaire Alexander at No. 18 overall on Thursday night is a skilled defender and kick returner.

“We think he’s versatile,” Packers director of scouting Jon-Eric Sullivan said. “He can run — he’s a 4.3 guy. He’s got really good twitch, lateral agility. So, we do think he can play inside. He’s very instinctive.”

In his first draft as Packers general manager, Brian Gutekunst had been eyeing Alexanders since the fall.

“He was one of those targets early on that we liked quite a bit,” Gutekunst said. “All of our scouts that went into Louisville this year liked him quite a bit.”

Injuries have ravaged the Green Bay cornerback position in recent years. The Packers dealt Damarious Randall to the Browns earlier in the offseason in a trade that brought backup quarterback DeShone Kizer to Green Bay. That left last year’s second-round pick, Kevin King, as the Packers’ top cornerback following an injury-shortened rookie year.

Veteran Tramon Williams returned as a free agent to the Packers, who also brought back Davon House. But a defense can never have too many cornerbacks in the pass-happy NFL.

The Packers feel Alexander can play in the slot and on the outside in new coordinator Mike Pettine’s defense.

“I pretty much can play wherever,” Alexander said.

The Packers are hoping Alexander is the playmaker they desperately need after another subpar year on defense. Alexander had a team-leading five interceptions as a sophomore in 2016. He only played in six games last season, starting five, after sustaining a knee injury. But the injury didn’t scare off the Packers.

Alexander was healthy at the NFL combine and turned some heads, running blazing 4.38 seconds in the 40-yard dash. At only 5-foot-11, Alexander has to use his speed to his advantage to beat bigger wide receivers.

“I definitely use speed a lot,” Alexander said. “Being faster than the receiver is only half the battle, so definitely rely on my speed and technique.”

Alexander’s speed along with his other exception intangibles were key in the Packers taking the 21-year-old.

“He’s very physical, very aggressive,” Gutekunst said. “When you have a corner that lacks great height like that sometimes you start to (think), is he a nickel? Can he play inside? Can he play outside? I think all of our staff, not only our personnel staff but also our coach staff, felt really good about him playing inside and outside. He’s a dynamic, explosive athlete.”

As a kick returner, Alexander had 20 returns for 210 yards and a touchdown as a sophomore. He’ll compete with Trevor Davis for the Packers’ starting return position.

Gutekunst noted that Alexander “was in consideration” for the Packers to select him at No. 14, but when the Saints called with a trade offer, it was too good to pass up.

“We got to 14, we had a number of players that we felt were similar value and that’s what one of the decisions to moving back,” Gutekunst said.