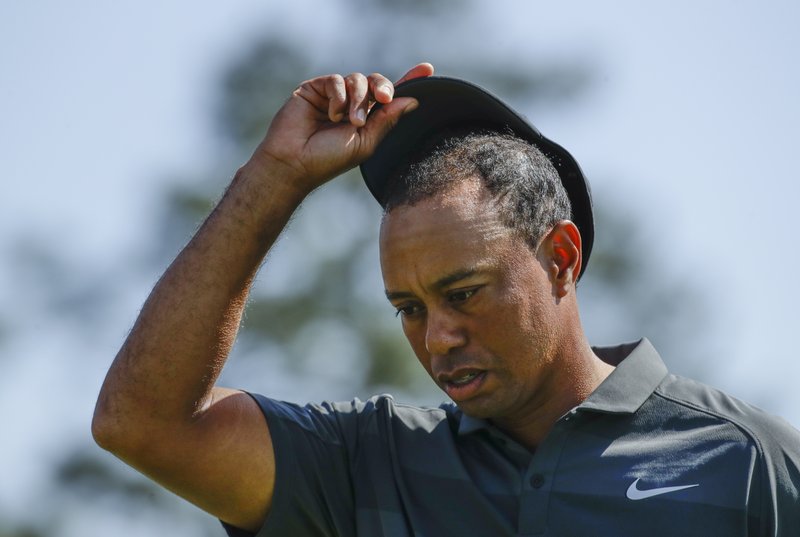 Tiger plods through his 1st Masters round since 2015

Tiger plods through his 1st Masters round since 2015

There was more applause when he strolled to the 18th green, though most of the patrons stayed in their fold-out seats.

Tiger Woods is back at the Masters.

Just not in the position so many of his fans were hoping he would be.

Woods plodded through an unspectacular opening round on Thursday, settling for a 1-over 73 that left him far off the lead but still feeling good about his chances.

Considering the buildup that accompanied his first competitive round at Augusta National since 2015 , it might’ve seemed like a bit of a letdown.

“I could have easily let the round slip away from me, but I got it back,” he said, brimming with that bravado of old. “And I’m right back in this tournament.”

When Woods stepped to the first tee on a sunny, brisk morning, the patrons finally heard the words they’ve missed out on at the last two Masters.

The cheers could be heard throughout the course .

Dressed in black from head to toe, Woods tried to approach his first shot like any other.

“Hit a little fade up the left side,” he thought.

The ball wound up in the trees left of the fairway.

“It didn’t fade,” Woods said with a sly grin.

As the sun soared higher against the blue sky, the temperature climbing into the 60s, Woods slipped off his black sweater and played the rest of the round in short sleeves.

He struggled on the par-5s, which are normally his bread and butter at Augusta, and that kept him from taking his score into negative numbers.

After all he’s been through — the surgeries, the personal troubles, the lingering doubts that he’d ever be able to compete again for major championships — just being out on the course, once again at the center of the golf universe, made him feel like a winner.

Two birdies over the final five holes helped his mood, too.

“A 73 is fine,” Woods said. “By the end of the week, this will be a pretty packed leaderboard the way the golf course is set up. They have it right where they want it. It’s really hard to run away from it, but it’s also really easy to lose it out there. By the end of the week there will be a bunch of guys with a chance to win this tournament.”

He intends to be one of them.

But for now, there’s work to be done.

The par-5s would be a good place to start. Over the course of his brilliant Masters career, the four-time champion has played those four longest holes at a cumulative 150 under par.

On Thursday, he settled for a 5 at each of them.

“I didn’t play the par-5s very well,” Woods conceded. “I have to hit better shots and better chips, too.”

He really struggled through Amen Corner, the famed three-hole stretch at the far edge of the club.

A horrible tee shot at the 11th flew past the trees of the right, and his next shot clipped some fans in the gallery, forcing Woods to scramble for a bogey. He made another bogey at the 12th — the shortest hole on the course — when he chunked a 9-iron off the tee and watched the ball splash into Rae’s Creek . Another wayward tee short at the 13th wound up in the pine straw, leaving Woods with no chance to go for the green. He pushed his second shot into the gallery lining the right side of the fairway, and missed a 12-footer for birdie.

At that point, Woods was 3-over for the day and looking very much like he might be on the verge of falling apart.

He managed to pull it together.

A brilliant approach at the 14th curled up about 8 feet short of the flag, and Woods rolled in the birdie putt. He sank a 20-footer for another birdie at the par-3 16th, giving him a bit of momentum heading into Friday.

He was also feeling plenty of relief.

“I played in a major championship again,” Woods said, “but also the fact that I got myself back in this tournament, and I could have easily let it slip away. And I fought hard to get it back in there, and I’m back in this championship. There’s a lot of holes to be played.”