Home NEWS Big Ten has big presence this year, with 3 teams at Frozen 4 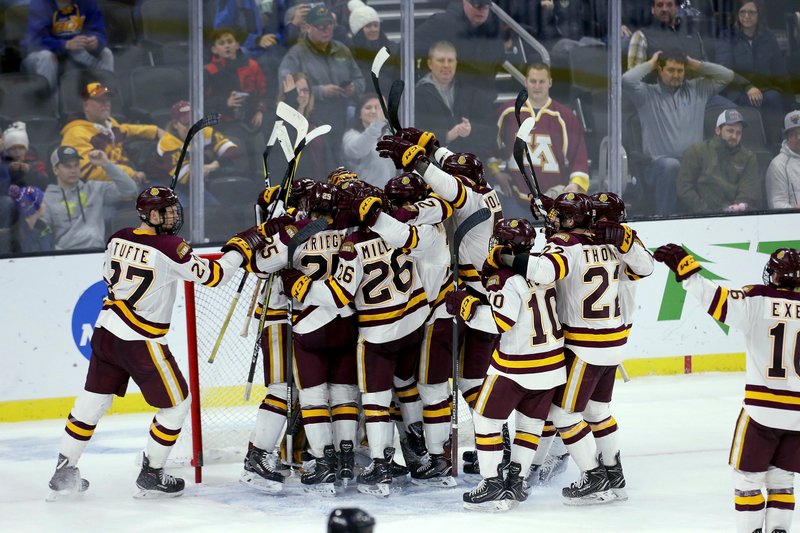 Big Ten has big presence this year, with 3 teams at Frozen 4

Big Ten has big presence this year, with 3 teams at Frozen 4

ST. PAUL, Minn. (AP) — Considering the force of the impact it made on the sport, the Big Ten hockey conference sure started with a soft launch.

Five years in, its presence has finally been felt. Three teams have reached the Frozen Four after four members comprised the top 12 seeds for the NCAA Tournament.

“I think this is what everyone envisioned when the new leagues all started to form, that the Big Ten would be like this,” Michigan coach Mel Pearson said.

Minnesota Duluth, the outlier in these national semifinals, plays Ohio State in the first game on Thursday. The Michigan-Notre Dame matchup follows.

“We were very fortunate to get the lead that we had in the regular season with that winning streak that we had, because we found out in the second half how challenging the conference is and how much better it got,” said Notre Dame coach Jeff Jackson, whose team won 16 consecutive games from Oct. 27 through Jan. 19.

UMD has a proud flag from the National Collegiate Hockey Conference to wave, too.

The Bulldogs have the most recent national championship of this football-defined quartet, in this building in fact. They beat Michigan and Notre Dame in 2011 at Xcel Energy Center, about a 2½-hour drive from campus, to win the program’s first NCAA title. More relevant to the current roster is the trip to the national championship game last spring in Chicago, a 3-2 loss to Denver.

“Props to the Big Ten. Pretty awesome, having three teams in here. But at the same time, we know the NCHC is one of the top, if not the top conference in college hockey,” UMD captain Karson Kuhlman said on Wednesday after practice.

UMD, with only nine players remaining from the national runner-up team last season, snagged the final at-large bid for the tournament after a wild weekend of conference tournament games that allowed the Bulldogs to nudge out Minnesota by a few percentage points. If just one of six of those contests would’ve gone the other way, the Gophers would’ve given the Big Ten a fifth entrant. Notre Dame’s win over Ohio State was one of the determinants.

“I owe Jeff Jackson a lot,” UMD coach Scott Sandelin said. “A couple beers in Florida will probably work. There’s about five other teams I could say the same thing for.”

Illinois is in the Big Ten queue for a potential expansion to eight teams, with fundraising in the works for a proposed new arena that would allow the university, which has a popular club team, to establish an NCAA Division I program. That’s what Penn State did earlier this decade, triggering the Big Ten’s creation as the minimum sixth team.

That pulled Minnesota and Wisconsin from the Western Collegiate Hockey Association, prompting North Dakota to lead an exodus from the nation’s oldest league to form the NCHC with Denver, St. Cloud State, UMD and four other schools. Fans in the northern states were disappointed by the breakup of several storied rivalries, and while the existence of the new league gave the Big Ten Network an upgrade in Friday night programming, the early returns on the product were modest at best.

Minnesota reached the national championship game in 2014, but the Gophers went one and done in the tournament the following year as the conference’s only entrant. Excluding Notre Dame’s appearances prior to joining the league, the Big Ten’s composite record in NCAA play was just 5-7 entering this season.

Last year, the announced attendance total for all five games of the conference tournament in Detroit was a mere 11,785. In St. Paul in 2016, the combined crowds were just 15,886. The timing of the Big Ten’s infancy was coincidentally bad, too, with Michigan, Michigan State, Minnesota and Wisconsin all in down cycles.

“You just keep looking for a chance to take a breath in our league, and there isn’t one,” said Pearson, who took over the Wolverines this year after the retirement of his former boss Red Berenson. “I think that’s what’s made all of us better.”

The last time a current member won the national title was Michigan State in 2007. Neither Notre Dame nor Ohio State has won one. Michigan has a record nine, though none since 1998.

After a 13-19-3 record in Berenson’s final year, the Wolverines were predicted to finish second-to-last in the Big Ten’s preseason poll. Pearson, who went to the national semifinals 11 times on Berenson’s staff, arrived from Michigan Tech and promptly took the program back to a familiar place. The Wolverines swept the Fighting Irish and star goalie Cale Morris in February.

Pearson is a native of the Twin Cities area, just like Rohlik, who spent 10 seasons as an assistant on Sandelin’s staff.

“The hockey world’s a small world,” Rohlik said, “no matter where you turn.”