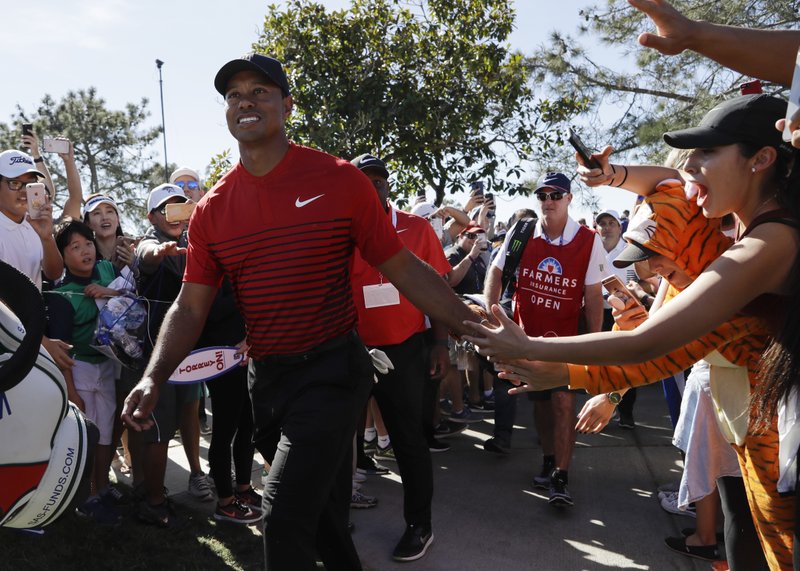 Consider this another tradition unlike any other.

Two or three or more of the best players win tournaments in the months leading to April, golf fans hear the familiar, soothing notes of “Augusta” in TV spots and declare that this is shaping up to be the best Masters of them all.

No doubt, there has been enough happen in 12 weeks to start counting the days.

Dustin Johnson started the year with an eight-shot victory that featured a 432½-yard drive on a 433-yard hole. He remains at No. 1 in the world. Two players have had a mathematical chance to replace him, most recently Justin Thomas, who was one match away.

The career Grand Slam became a popular topic again when Rory McIlroy won the Arnold Palmer Invitational, his first victory in 18 months. This will be his fourth attempt to become the sixth player to capture all four majors. The other three were not particularly close.

One other element to this Masters: Tiger Woods.

He is generating the bulk of the buzz, and Woods hasn’t even won yet.

So yes, the Masters can’t get here soon enough.

But is that much different from a year ago?

Look at the landscape in 2017. Jordan Spieth won big at Pebble Beach and had never finished worse than runner-up in three Masters. Thomas shot 59, set a PGA Tour scoring record for 72 holes and swept Hawaii to begin his emergence as the next young star. Hideki Matsuyama was on a roll. Jon Rahm was just getting started. Rickie Fowler won again. And then Johnson found another gear and won three straight tournaments.

And then Sergio Garcia won his first major in his 20th year as a pro.

The difference now is that picking a favorite is like picking a favorite hole at Augusta National. The Westgate Las Vegas Superbook most recently had Woods, Thomas, McIlroy and Johnson at 10-1. Spieth and Rose were 12-1. Watson was right behind at 14-1, followed by Mickelson and Day at 16-1.

If it seems crowded at the top, consider what brought us to this point.

— Westgate had Woods at 50-1 for the Masters right before he returned to competition the first week of December in the Bahamas.

— Johnson wins Kapalua by eight shots for his eighth victory in his last 34 events, all against some of the strong fields.

— Rahm ended 2017 by winning the European finale in Dubai, was runner-up at Kapalua and won the CareerBuilder Challenge. With a chance to go to No. 1 in the world at Torrey Pines, he went from a one-shot deficit after 36 holes to a 75-77 weekend. Woods made the cut at Torrey Pines with a two-putt birdie from 70 feet on his last hole. He tied for 23rd, exceeding expectations. Masters odds go to 20-1. Day won Torrey Pines in a playoff for his first victory in 20 months.

— Johnson finished second at Pebble Beach to Ted Potter Jr., who has missed every cut since then. Imagine if Johnson had won Pebble. He would have two wins this year, nine in his previous 36 starts. He would still be the clear favorite at Augusta.

— Watson won at Riviera for the third time, his first PGA Tour victory in two years. Woods misses the cut at Riviera. His Masters odds go to 25-1.

— Thomas doesn’t have his best stuff and still wins the Honda Classic with a clutch wedge and a 5-wood. Woods, seven shots behind going into the final round, finishes 12th at Honda Classic. Masters odds for Woods go to 16-1.

— Mickelson wins Mexico Championship in a playoff over Thomas, who holed a wedge from the fairway for eagle on the 18th hole. Mickelson had eight straight years of top 10s at the Masters. He expects to do well there. Everyone does.

— Woods is runner-up at the Valspar Championship by one shot. Johnson and Thomas are co-favorites at 8-1. Woods is now 10-1.

— Woods opens with a 68 at Bay Hill, one off the early lead. As he plays his back nine, Westgate announces he is the Masters favorite at 8-1. “A lot of gambleholics out there,” Woods says after the round. McIlroy birdies five of the last six holes to win Bay Hill.

— Thomas is one match away from getting to No. 1 in the world when he loses, 3 and 2, to Watson in the semifinals of Match Play. Watson wins for the second time in his last four events.

“In the end it might be a good thing going to Augusta without that,” Thomas said of the No. 1 ranking. “I get to go do what I was going to do and let DJ have all that pressure.”

Except Johnson won’t have all the pressure, not with so many favorites — including Woods.