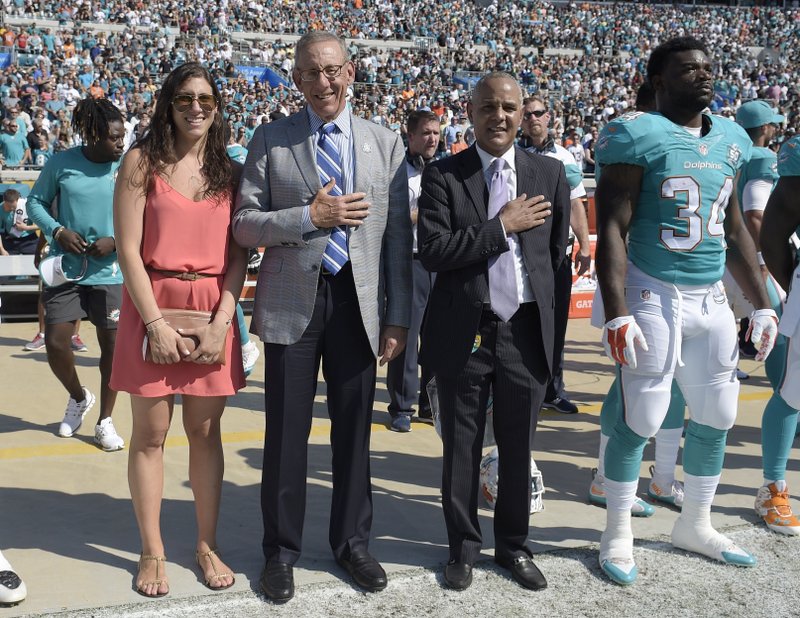 MIAMI (AP) — Miami Dolphins owner Stephen Ross says he won’t force his players to stand for the national anthem, even though he believes kneeling is a counterproductive way to promote social justice.

Ross’ comments Tuesday in a statement released by the Dolphins came after the New York Daily News reported that he said all of the team’s players will stand for the anthem in 2018. Ross was in New York on Monday to be honored by the Jackie Robinson Foundation and receive its ROBIE Lifetime Achievement Award.

“I have no intention of forcing our players to stand during the anthem, and I regret that my comments have been misconstrued,” Ross said in his statement.

“I’ve shared my opinion with all our players: I’m passionate about the cause of social justice, and I feel that kneeling is an ineffective tactic that alienates more people than it enlists.”

Colin Kaepernick started the NFL anthem movement when he was with the San Francisco 49ers in 2016 to protest racial inequality and police brutality. President Donald Trump has criticized the movement, saying it’s disrespectful to service members.

“I know our players care about the military and law enforcement too,” Ross said in his statement, “because I’ve seen the same players who are fighting for social justice engaging positively with law enforcement and the military. I care passionately that the message of social justice resonates far and wide, and I will continue to support and fund efforts for those who fight for equality for all.”

Dolphins players Julius Thomas, Michael Thomas and Kenny Stills knelt during the anthem before games last season. At one point coach Adam Gase established a team rule requiring players either to stand for the anthem or stay in the tunnel.

When protesting players told Gase waiting in the tunnel was interfering with their game preparation, he relaxed the rule and allowed them to resume their sideline kneeling.

Stills was the Dolphins’ nominee for the NFL’s Walter Payton Man of the Year Award, which honors involvement in the community and performance on the field. He’s expected to be back with Miami with 2018, but Julius Thomas and Michael Thomas are less likely to return.

0
0   0
previous Source: NFL seeking $2M from Jerry Jones over legal spats
next The great QB Shuffle of 2018 is well under way
Related Posts