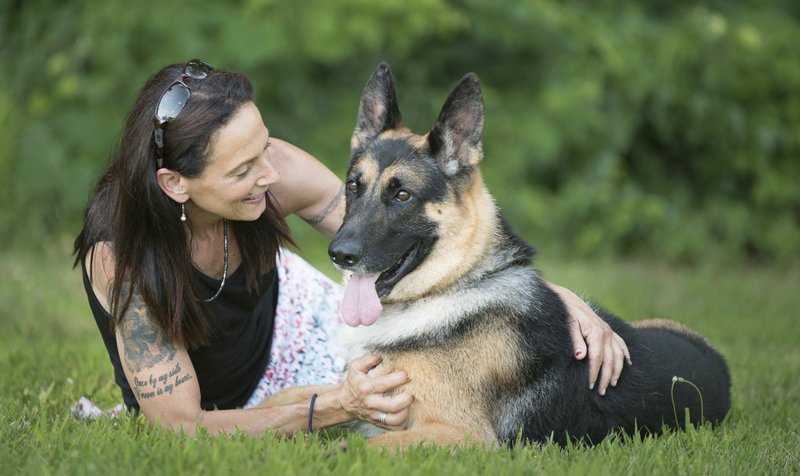 NEW YORK (AP) — Exactly what happened to the dog on that New Jersey highway, no one really knows.

This much is true: Fanucci the young German shepherd was so shattered, so bloodied after jumping out of a broken-down van hooked to a speeding tow truck, his life was in jeopardy.

“You see the dog, you see the pain. You don’t want him to suffer,” co-owner Stephanie Schrock said. “For half an hour, we thought about whether we needed to euthanize him, trying to come up with the right decision.”

Come Monday morning, his road will be a lot smoother — he’ll step onto the carpeted ring at the Westminster Kennel Club, showing not a scratch from his 2014 wreck.

There are 2,882 entries at America’s most prestigious dog competition, plenty of them favorites. Ty the giant schnauzer is top ranked, Newton the Brussels griffon took the big Thanksgiving event, Striker the cocker spaniel has won a lot.

“This year, it’s as wide open as I can remember,” show chairman David Helming said.

In 2004, Helming’s barking, slobbering Newfoundland named Josh was a bow wow, winning best in show. The new champion among 202 breeds and varieties will be chosen Tuesday night at Madison Square Garden.

Rumor the German shepherd won last February, and then she retired. That leaves a clear path for 5-year-old Fanucci, named for a character in “The Godfather Part II” and considered by many the best of his breed in the nation.

He’s already twice competed at Westminster, once taking home an award of merit. It’s been more than a century since two different dogs of the same breed have won this show.

“If he never does anything in his career, he’s done more than you ever have imagined,” said handler Sue Condreras, a physician’s assistant from Farmingville, New York.

Back around Labor Day 2014, Fanucci was off to a fast start. He’d won two herding groups that weekend and was riding with a pack of dogs inside a van that stalled.

It was hot, and co-owner Leslie Dancosse made sure to crack the window before climbing into the tow truck. They were headed to a garage, going 60 mph or so, when a car suddenly waved them down.

The driver’s words nearly paralyzed Dancosse: “A German shepherd just jumped out of the van!”

Frantically, she ran back more than a mile along the highway and found a woman, herself in a full leg cast, cradling Fanucci in a blanket.

“He tried to get up. He couldn’t. There was blood everywhere,” Dancosse said.

Somehow, perhaps unnerved by the clanks and clunks, Fanucci had escaped his crate, pulled down the window and leapt out. He didn’t get hit on the highway, but landed hard and was in rough shape.

His right rear leg was dangling, as badly broken as anything Dr. Guy DeNardo had ever seen at the Valley Central Veterinary Referral and Emergency Center in Whitehall, Pennsylvania. Surgery took five hours or so, cost about $10,000 and included rods, pins, screws and wire.

“It was in quite a few pieces. It truly was a puzzle to put back together,” he said.

DeNardo’s prognosis: Fanucci would eventually walk, “but to make it back into the show world, that might’ve been doubtful.”

Said Condreras: “But nobody told Fanucci this, that he wouldn’t show again.”

Over several months, rounds of acupuncture, chiropractic care, massages, physical therapy and road work got him moving again. Within a year, he began competing again. And winning, too.

Now, he’s ready to possibly to take his biggest steps yet.

Schrock, a retired vet tech from Milton, Delaware, has never been to Westminster. She’ll be there this time.

If Fanucci earns a place in the best-of-seven final ring, DeNardo also would like to attend.

“I do remember this one, piecing that thing together,” he said. “I remember saying that if he ever makes it back, I want to know.”

Also worth barking about, in and out of the rings:

THE DOGHOUSE: Golden retrievers are sweet, faithful and absolutely perfect pets. So how come they never, ever win at Westminster? And what about Labs, Chihuahuas, dachshunds and Dalmatians — why do those familiar pooches always get shut out?

Maybe because they’re popular, but don’t pop. A perky wire fox terrier (14 titles) or a primped poodle (nine wins) is much more likely to catch a judge’s eye.

BARK-ETOLOGY: There is zero prize money for the best in show owner, who does get a shiny bowl, lucrative breeding prospects and bragging rights. But there’s a $1 million reward for the person who picks the seven group winners and champ in the Purina Pro Plan contest. Former NFL star and current Mets outfielder Tim Tebow is pitching the online game. His choice is a Rhodesian ridgeback. But beware: No Rhodesian has ever won Westminster. Not even Tebow’s own Bronco.

WHAT’S NEW?: For the first time since 2006, no new breeds will show on the green carpet. Next year, the Nederlandse kooikerhondje and the grand basset griffon Vendeen make their debuts; last year, the American hairless terrier, sloughi and pumi were the newcomers. The American Kennel Club decides which dogs are eligible.

0
0   0
previous North Korea won Pyeongchang political gold, but what’s next?
next OLYMPICS: What would a South Korean ask a North Korean?
Related Posts