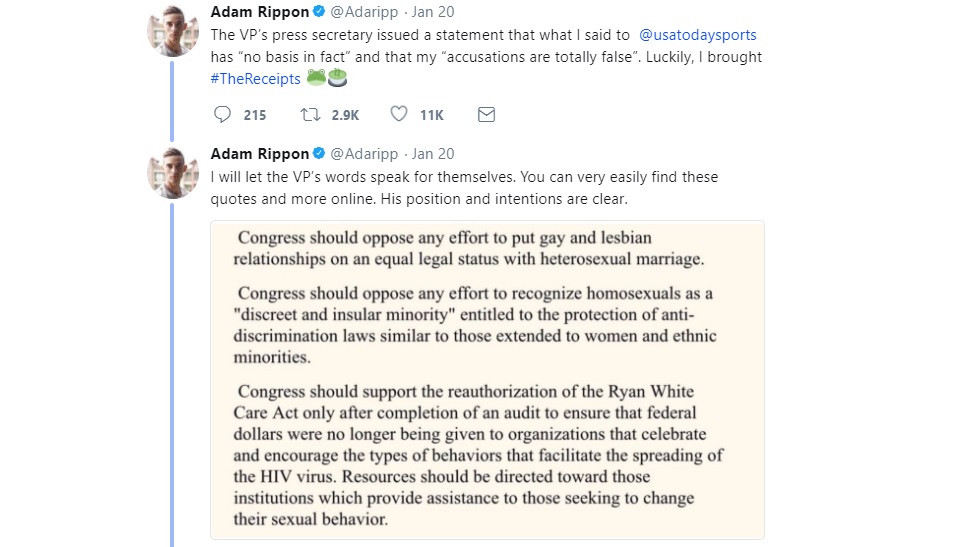 Olympian Adam Rippon has ‘no interest’ in fight with Pence

Olympian Adam Rippon has ‘no interest’ in fight with Pence

Figure skater Adam Rippon insists he has no interest in “picking a fight” with Vice President Mike Pence, who has been chosen by the White House to lead the U.S. delegation at the Winter Olympics.

He’s not backing away from his beliefs, though.

The 28-year-old Rippon, who is openly gay, recently criticized Pence’s highly visible role in the Pyeongchang Games during an interview with USA Today. Pence has been considered an opponent of the LGBT community after he signed the Religious Freedom Restoration Act as governor of Indiana.

Critics of the legislation claim it encourages discrimination against gay people.

“I don’t think he has a real concept of reality,” Rippon told the newspaper. “To stand by some of the things that Donald Trump has said and for Mike Pence to say he’s a devout Christian man is completely contradictory. If he’s OK with what’s being said about people and Americans and foreigners and about different countries that are being called ‘shitholes,’ I think he should really go to church.”

Rippon’s criticism of Pence drew a sharp rebuke from his press secretary, Alyssa Farah, who called some of his statements “totally false” and that they had “no basis in fact.”

On Monday, Rippon told reporters on a conference call that the quick response from Pence’s office surprised him, but he was glad his concerns as an athlete and American citizen had been heard.

“Obviously yes, it surprised me. It surprised me a lot,” he said, “but I’m glad. I’m glad my voice has been kind of heard. I mean, I was surprised, but I don’t think it was a bad thing.”

Rippon took to social media after his original comments, backing up his claims with what he called “the receipts” — links to statements and legislation that Pence has made or supported. He also said he had no interest in meeting Pence during a traditional meet-and-greet among delegation officials and U.S. athletes that takes place shortly before the opening ceremony.

I will let the VP’s words speak for themselves. You can very easily find these quotes and more online. His position and intentions are clear. pic.twitter.com/XmH0v9pqua

Rippon said Monday that his focus remains on performing in Pyeongchang, where he will be competing in his first Olympics, and not engaging in any kind of social protest.

“I’m trying to train for the biggest competition of my life. I’m not trying to pick a fight with the Vice President of the United States,” Rippon said, adding that he’d happily engage in dialogue with Pence once the competition comes to a conclusion.

Rippon, thought to be the first openly gay athlete to compete for the U.S. at a Winter Games, is considered a long shot to land on the podium in the men’s competition in South Korea. But he could be part of a U.S. squad competing in the team event. The Americans are expected to challenge the Canadians, Japanese and a team representing athletes from Russia for a medal.

Rippon said he hasn’t given much thought to being a gay athlete at the Olympics — he came to terms with his sexuality long ago. But he also hopes to be a role model to people who may not have “the luxury” of acceptance, especially those like himself that come from relatively sheltered upbringings.

“Being out and being visible can help make the journey a lot easier for somebody else,” he said. “When I was a really young kid, being from a small town was challenging. I didn’t have any role models. I didn’t have anybody to look up to. I didn’t feel like I belonged. And I told myself as I was older, if I ever had a chance to share my story, I would, and being gay is just something I am.

“It’s part of who I am,” Rippon added, “but you know? Getting to the Olympics is about the hard work I put in over years and years of practice.”