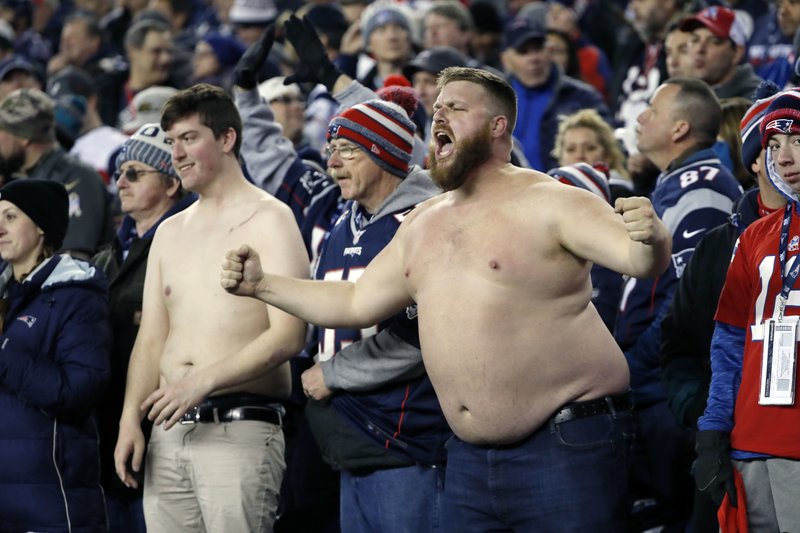 PHILADELPHIA (AP) — Binge drinking for hours in stadium parking lots, a few Philly fans flexed their beer muscles with throws that were as on point as Nick Foles connecting with his Eagles receivers.

Sure, the Minnesota Vikings fans who walked through hostile enemy territory that would set the stage for malfeasance at the NFC championship game had to expect the boos, the four-letter words, the obscene gestures, the shouts to go home, the, well, the misconduct list goes on for churlish Eagles fans.

What’s it like to be a #Vikings fan inside the #Eagles tailgate? *Sound up* I followed a few fans in purple. @kare11 pic.twitter.com/GkK9viGyRR

This was a dangerous twist on Target Field for the Minnesota faithful.

Social media users captured snapshots of fans dodging and weaving cans, crushed red solo cups and all kinds of trash launched toward anyone in purple and gold, and many more Vikings fans complained on Twitter of witnessing random acts of violence. Some fans whined their Vikings hats were swiped off their heads and tossed into urinals before Eagles fans showed why their team was No. 1 in the NFC.

Met up with @Vikings fans arriving home @mspairport from Philly early this morning. The two takeaways…they're sad about the team losing and they're disgusted with Eagles fans. pic.twitter.com/2aLdYScZ8L

Mongo from “Blazing Saddles” would surely tip his cap at the way Eagles fans can sock a horse.

I have extended family in Philly attending game who left at halftime fearing safety, being sworn at and threatened, and were accosted getting in the cab. Nice.

Eagles fans are coming to your city.

There are no worse fans in sports than Philly fans. I'm guessing many — not all — are subhuman. I wanted to laugh watching their "celebration" Sunday night but I was too busy crying. What a joke they are. What an embarrassment.

And the Massholes are joining in on the Super Bowl bash.

Patriots-Eagles is more than a 2005 Super Bowl rematch. It sticks two of the more maligned — and misunderstood — fanbases in the NFL within striking distance of each other at US Bank Stadium.

It’s time to line ’em up — the Santa Snowball Hurlers vs. the Deflategate Truthers in a fight for the checkered flag of most obnoxious fans.

But certainly not the most violent.

Eagles fans involved were in a scuffle with and police officers in one parking lot that left at least one fan beaten and bloodied before the NFC championship game.

Police only reported two arrests for disorderly conduct and one for assault on police. They also reported three arrests for counterfeit ticket sales.

NFL fans from Kansas City to Jacksonville are just sick — or jealous — of the Patriots going to the Super Bowl and watching New England celebrate on duck boats and parade routes. Patriots fans are often called entitled or nauseating for their Super Bowl gloating. There are New England teens who believe Super Bowl appearances are as much a given right as lobster rolls and clam chowder.

It wasn’t all serious in Philly.

After the game, huge crowds gathered in neighborhoods around the city cheering and chanting.

Earlier in the day, workers in Philadelphia who jokingly called themselves the “Crisco Cops” greased light poles to try to prevent fans from climbing up them after the game.

During the fourth quarter, Philadelphia police posted an image of Crisco on Twitter . While urging fans to celebrate responsibly, they wrote, “Now comes the time in the night where we must warn everyone about the dangers of Saturated Fats.”

Now comes the time in the night where we must warn everyone about the dangers of Saturated Fats. Cheers for #Foles! Jeers for #Poles! It's a long way down, baby. Celebrate responsibly! pic.twitter.com/mES5MpPTY4

Jana Hokinson of Manson, Iowa, was one Vikings fan who traveled to Philadelphia for the game. She told Minneapolis’ WCCO-AM radio that she walked into the stadium with a group of other Vikings fans. Suddenly, two men in the front of the group were hit in the head with something and bleeding.

“One guy had a cracked forehead and the back of his right ear was just bleeding. The other guy, it was his left ear,” she said.

She said that security told their group there was nothing they could do.

Once she got to her seat, the fans around her were giving her group some good-natured grief at first, but after the Vikings scored, one of her sisters got spit on by Eagles fans, and another sister had food thrown at her.

She said she left after the third quarter and “security escorted us out because I got beer cans thrown at me.”

Hokinson said they were escorted to the car, but they had promised to give a man from Minneapolis a ride to the airport. Security had to go back and retrieve that Vikings fan from his club seat because Eagles fans were blocking him and wouldn’t let him leave.

“It was crazy,” she told the radio station.

When the Eagles fans come to Minnesota: “I just hope our fans stay classy. Because that’s a whole other level of crazy down there. And I know the fans up in Minnesota, they’re not going to stoop that low. I hope they don’t.”

Yes, that’s classic sweatheart thinking that everyone in Minnesota is so nice.

Not always true. Not necessarily a problem. The all-day tailgating isn’t generally in full 0.20 BAC levels at the Super Bowl as it is on NFL Sundays and the league will generally assemble a massive task force to thwart fan violence.

“You can’t group all Eagles fans into that group,” Thielen said one day after his team bus was pelted with beer on its way out of Philly. “It’s kind of the same thing with the NFL sometimes. If somebody gets in trouble, it kind of gets put on everybody.”

The Vikings team bus getting a very Philly send off pic.twitter.com/QABIBX1uD5

Still, it might be a good thing Mary Richards isn’t around to toss her winter cap in the air.

It might end up caught and tossed in a toilet by a partying Birds fan.