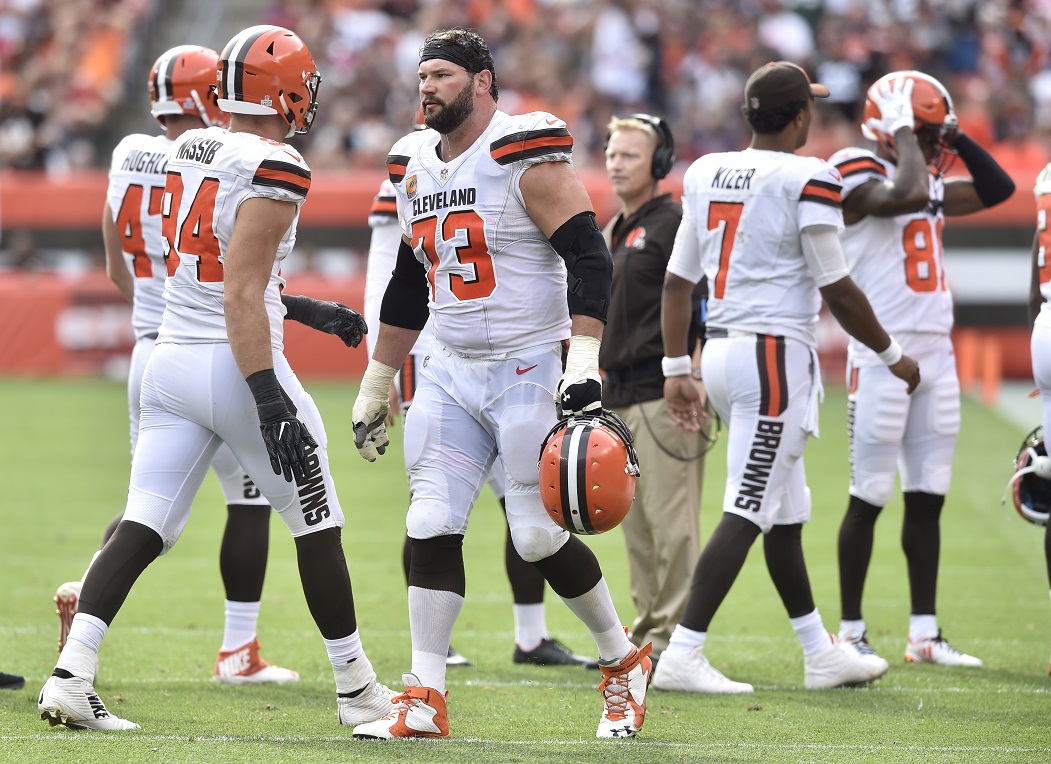 “Making progress,” the 10-time Pro Bowler said. “Had a lot of time to think and spend some time with the family, but not ready definitively to make a decision one way or the other just yet. Really for me, my decision is just going to come down to do I feel like I’m healthy enough to survive another season?”

One of the NFL’s premier tackles, Thomas was on the field for 10,363 straight plays before his triceps ripped while blocking on a running play against Tennessee. Thomas planned to take the offseason to weigh his options, and he remains unsure if he wants to make a comeback or move on to a new career, perhaps in the TV broadcast booth.

Thomas isn’t leaning in either direction.

“There’s some days you go back and forth,” he said.

Thomas was a presenter at the Greater Cleveland Sports Awards, which he attended with his wife, Annie. Thomas said he has not received any pressure to make his decision from the Browns, who are coming off a historic 0-16 season.

“I don’t think there’s any real rush at this point,” he said. “Obviously, they want to know before the draft and free agency, so that if they have to make different plans if I’m not going to be there, they want to know about it. I told them I’ll make a decision when I’m ready and let them know and give them as much time as I possibly can.”

Thomas said he won’t be medically cleared to play until summer, but that timeframe has no bearing on his decision.

“It’s seven-to-nine months from surgery, so that would put me in June or July,” he said. “But I’m not worried about that. The elbow is something that’ll take care of itself. I feel confident the rehab has gone well and it will continue to go well. Really for me, knee and back are the primary issues that I’ve been dealing with a number of years.”

Thomas came close to quitting before when a back spasm in 2007 lasted four weeks.

“Couldn’t practice. Basically couldn’t tie my own shoes,” he said. “And I go, ‘This is my last year. There’s no way I can do this another season.’ And I made it four more after that. So it’s weird the highs and lows that you go through during a season, especially because of the emotional and physical toll a game takes on you.”

Former Cavaliers center Zydrunas Ilgauskas received a lifetime achievement award at the gala event. The 7-foot-3 Ilgauskas was affectionately known simply as “Z” by Cleveland fans who embraced the Lithuania native and made him one of their own.

Ilgauskas overcame two major foot injuries early in his career and played 13 seasons in the NBA before retiring in 2011 after one year in Miami. The Cavs retired his No. 11 in 2014.

Ilgauskas recalled that early in his career, owner Gordon Gund had a deal worked out to trade him to Detroit. He turned it down.

LeBron James said Ilgauskas was one of his favorite teammates.

“We had a heck of a chemistry with our pick and pop,” James said. “Multi-talented guy but even greater person to be around every day. Came to work every day, showed up every day and he gave everything he could to this franchise and the Heat franchise.”