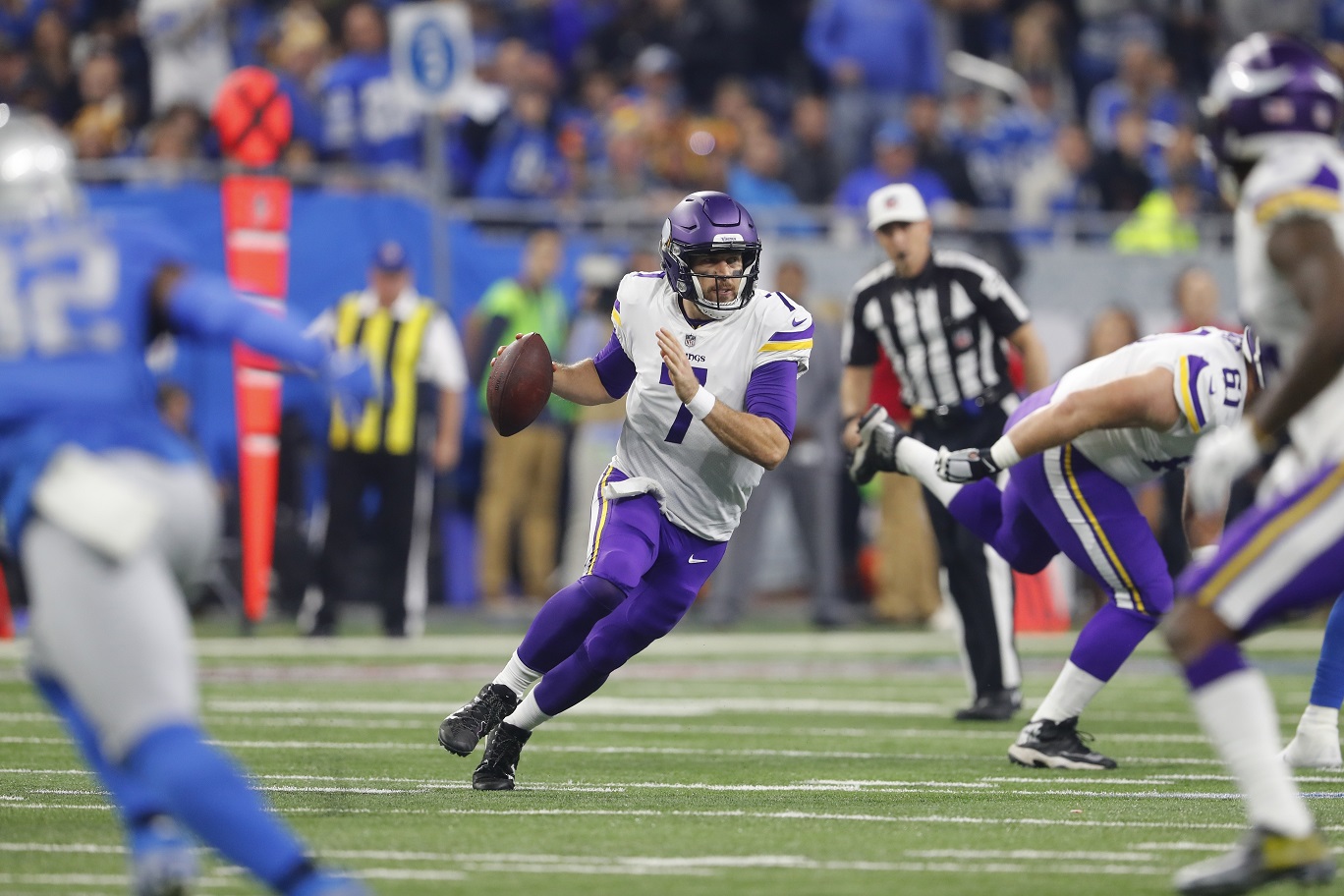 The case for Keenum: Vikings QB keeps on disproving doubters

The case for Keenum: Vikings QB keeps on disproving doubters

The Vikings were forced to turn to their backup quarterback to start the second game of the season after Sam Bradford’s knee acted up, an ominous development that can doom a team to an autumn of disenchantment and playing for draft pick position.

Despite the decisive defeat against the Steelers that day, though, there was a certain assurance Keenum gave his teammates that suggested they’d be all right.

“He’s a guy you want to play for,” wide receiver Adam Thielen said.

Four months later, the Vikings and Keenum are still playing. They’re two wins away from reaching the Super Bowl.

“It’s been a blast, man. It’s been incredible. I’m sure one of these days I’ll be able to look back and really appreciate it, but there’s so much to enjoy right now,” Keenum said. “Not really putting too much into perspective. Not really looking too much at the big picture. I’m keeping my blinders on.”

With a modest 6-foot-1, 215-pound frame, Keenum was mostly ignored by major college programs despite leading Abilene Wylie High School to its first state championship in football-obsessed Texas. Houston made his only FBS scholarship offer, from then-head coach Art Briles, and by the time Keenum was finished with the Cougars he was the NCAA’s all-time leading passer with 19,217 yards and 155 touchdowns. Yet he still went undrafted in 2012, needing the Houston Texans practice squad to get his professional career off the ground.

Keenum started 10 games over the next two years before being traded to the Rams in 2015, but they made Jared Goff the first pick in the 2016 draft so there was no future for Keenum there beyond being a veteran mentor.

Even Vikings head coach Mike Zimmer was among those who typecast Keenum as a just-in-case second-stringer. Zimmer acknowledged recently he didn’t gain full confidence in Keenum until the 11th or 12th game of the season and, when Teddy Bridgewater was cleared to play in mid-November, Zimmer never declared Keenum the starter for more than a week at a time.

“He just wanted a chance,” his father, Steve Keenum, said this week in a phone interview. “He’s got to have the knack. It’s just a God-given, innate thing that he’s maximized by working hard.”

As the oldest of his three children, Case made clear at an early age to Steve that he had the makeup to be an NFL quarterback even if there was no way to predict how the skill set would unfold.

“He was competitive in everything. It could be a board game. It could be playing darts. It could be playing cards. It didn’t matter. But if it had a ball, he wanted to do it,” said Steve, who was a high school and college coach around Texas for 24 years, including 10 seasons as the head coach at his alma mater McMurry University.

Good coaching, starting with dad’s tips in the family backyards, was another success factor.

When Briles left for Baylor, Kevin Sumlin arrived at Houston for Keenum’s sophomore year. Dana Holgorsen, now the head coach at West Virginia, was the offensive coordinator and quarterbacks coach. After he departed, Kliff Kingsbury, currently the head coach at Texas Tech, took charge of the quarterbacks.

“They had some speed, and the next thing you know they were throwing the ball all over the field,” said Steve, who attended all 57 of Case’s games with the Cougars and has been to each game he’s played for the Vikings. “They had some really talented kids. People talked about him being a system guy, with short passes and a run after the catch, but they didn’t see him play.”

Steve is now an area director for the Fellowship of Christian Athletes, an organization that Case has long been active in as well.

“He’s come to the realization like a lot of people in big situations that there are things that are really too big to do by yourself, and in order to stay grounded you’ve got to find somebody or something that you believe strongly in,” Steve said. “I think his faith has been that for him.”

Though Keenum had prior NFL experience, including nine starts for the Los Angeles Rams in 2016, he was signed by the Vikings as a one-year stopgap to be the guy in the ball cap providing sideline support and give Bridgewater ample time to recover from his colossal knee injury. Bradford had just produced an injury-free career-best performance in 2016, after all, so the Vikings were banking on him.

Over the last four months, though, they’ve been cashing in on Keenum, a dividend that has paid out handsomely for both parties.

“We’ve got a great group of guys here,” he said, “and I think we’re all excited to be extending our season.”

With offensive coordinator Pat Shurmur deftly adapting the team’s scheme to use Keenum’s mobility to better advantage and a sleeker offensive line mostly protecting him well, the Vikings have leaped up the league rankings in every significant statistical category. Among them: 28th to ninth in scoring touchdowns on possessions after passing the 20-yard line, and 19th to third in third-down conversions.

Keenum will start his first playoff game Sunday against New Orleans, with a raucous home crowd at U.S. Bank Stadium ready to cheer the next step toward the franchise’s elusive first championship.

“Our fans are awesome,” Keenum said. “All my friends and family who have come up from Texas and my friends from other teams that come in, they’ll text me after the games and they’ll be like, ‘Dude, that place is ridiculous.’ It really is.”