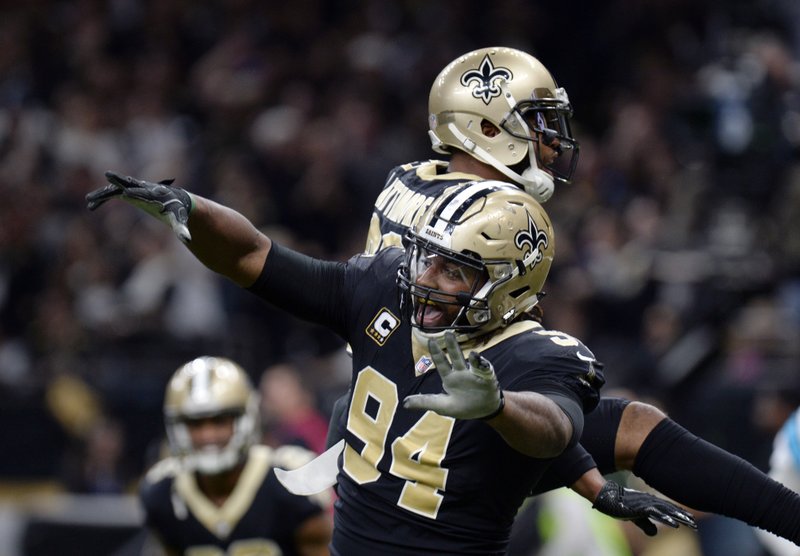 METAIRIE, La. (AP) — As much as Saints All-Pro Cam Jordan admires his father, Steve, and effusively praises the former Minnesota Vikings tight end, he hasn’t been able to resist the urge to be his own man.

Cam Jordan never wanted to play tight end, and acknowledged on Thursday that he doesn’t always follow his father’s advice, either, particularly when it comes to his playful antics and comments when engaging the media.

When Jordan consistently gets the better of an offensive lineman, he’ll refer to him as “Speed Bump Magee.” After last Sunday’s playoff victory over Carolina, Jordan conspicuously positioned a bottle of Jordan cabernet (not a family business) on the top shelf of his locker and pledged to send his namesake wine to his namesake star quarterback, Cam Newton.

Jordan said his father, “always tries to tone me back. He’s always like, ‘Hey, dude, have you thought about the ramifications?’”

“No, I haven’t. I shot my shot and said what I said and had to back it up,” the younger Jordan continued. “At 28, I’m in my physical prime so at this point I feel like I can back it up.”

Indeed, Jordan was named first-team Associated Press All-Pro for the first time in his career this season — his seventh since being New Orleans’ first of two first-round draft choices in 2011 out of California. The 6-foot-4, 287-pound edge rusher had 13 sacks, 17 tackles for losses, 28 QB hits, 11 passes defended (mostly batted passes), an interception and two forced fumbles.

Teammates marvel at his conditioning, boundless energy and how he hardly ever misses a defensive snap.

In last weekend’s wild-card round playoff triumph over the Panthers , Jordan not only had a sack, a tackle for loss, a QB hit and two batted passes, but he also forced Cam Newton into a pivotal intentional grounding penalty. That play turned a second-and-10 at the Saints 21-yard line with 41 seconds left into third-and-23 at the New Orleans 34 — with just 19 seconds to go after a 10-second runoff for an offensive penalty in the final minute. The Panthers could not recover in a 31-26 loss.

Now Jordan is preparing for a high-stakes playoff clash in Minnesota, where he spent his early childhood while his father was being named to Pro Bowls — six in all — for the Vikings. Jordan knows plenty about Vikings history, but doesn’t sound too sentimental about it.

Cam Jordan said he expects his father and brother to be at the game, along with old family friends from the area. Whether he brings along another bottle of his namesake wine is to be determined, he said.

Steve Jordan’s career ended in 1994, when Cam was 5. Soon after, they moved to Arizona.

The elder Jordan described himself as “pretty jovial” and someone who “could get goofy on occasion.” But Cam, he said, is “full-on most of the time.”

“He’s just a fun-loving guy. He doesn’t take himself too seriously, doesn’t take life too seriously,” Steve Jordan said. “But this game of football, particularly now, he’s definitely taking that serious. And he’s really focused, and I like that.”

The younger Jordan considers the Phoenix area his home, as he says, because that’s where he had his first kiss and learned how to drive. He doesn’t get all that nostalgic about returning to Minneapolis.

“I remember jumping in some leaves, getting so cold outside we got locked out of a car,” Jordan said with a chuckle. But he also fondly remembers meeting a number of “my dad’s co-workers, and they turned out to be legends. You talk about (defensive end) Chris Doleman, you talk about (safety) Joey Browner, (running back) Darrin Nelsons of the game. I won’t talk about Herschel Walker, because he ruined (that) franchise.

“You grow up and you get drafted by the Saints,” Jordan added. “This is my team. This is my family.”

“It’s just Cam’s personality,” Payton said. “He’s humorous and I think he genuinely enjoys what he does and that’s just how it’s expressed. Outside of that, I’m glad he’s on our team.”

“He’s had a great career, great year, and it’s going to be a tough battle,” Vikings offensive tackle Mike Remmers said. “The first thing that we’d like to do is just block him. … He’s just fast, physical, just a smart player. He’s really got a little bit of everything.”

Vikings QB Case Keenum called Jordan “a really talented player” who “creates a lot of havoc in the backfield in the run or pass game — a guy that we need to know where he’s at at all times.”

Odds are, they’ll hear him coming.

No Place Like Home? Host Advantage Vanished In Year Of Virus