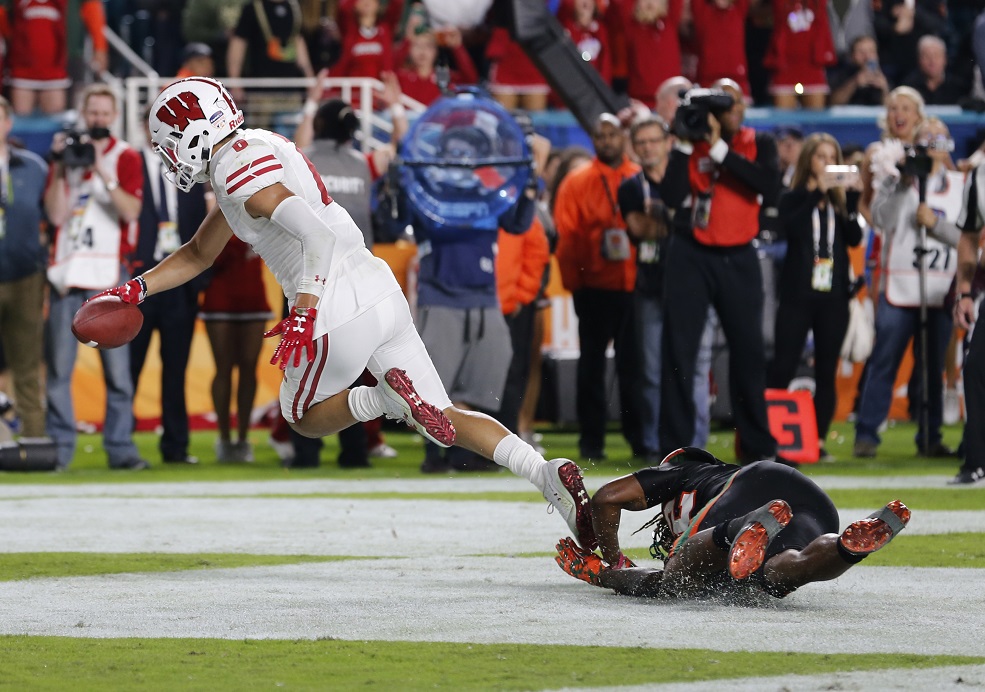 No. 6 Wisconsin looks to build on record 13-win season

No. 6 Wisconsin looks to build on record 13-win season

MILWAUKEE (AP) — No. 6 Wisconsin was minutes removed from wrapping up the winningest season in school history when coach Paul Chryst started talking about the future.

The first 13-win season in school history may be difficult to duplicate in 2018, especially with the restocking that must be done on one of the nation’s top defenses. The offense, though, looks more promising than ever after the 34-24 win over Miami at the Orange Bowl.

“We’ve taken a lot of pride in everything that happened, what the players, coaches did before us,” a proud Chryst said Saturday night after the program’s fourth straight bowl win. “They have a responsibility to keep that going and try to build on it.”

Running back Jonathan Taylor will return after a record-setting freshman season. Quarterback Alex Hornibrook heads into the offseason with the best performance yet of his two-year career — a four-touchdown night against the Hurricanes on the road.

The Orange Bowl played out as a microcosm of the rest of the season for the Badgers (13-1), who fell behind 14-3 and overcame mistakes to pull away for a victory. Wisconsin came up one comeback short of making the playoffs after losing 27-21 to Ohio State in the Big Ten title game.

“I think the best part of tonight was a reflection of what it’s been all year, and it’s a great team victory,” Chryst said following the Orange Bowl.

DEFENSIVE DEPARTURES: The defense didn’t slack off even after arguably its best player, Jack Cichy, went down in training camp to a season-ending knee injury. Fellow inside linebacker T.J. Edwards, an AP All-American selection, was weighing whether to skip his senior season and enter the NFL draft.

Junior cornerback Nick Nelson already has announced he’s entering the draft, leaving three holes to fill in the secondary around returning safety D’Cota Dixon. The Badgers also face heavy losses on their underrated defensive line and at outside linebacker, where Leon Jacobs and Garret Dooley played well in their only season as starters.

STRONG UP MIDDLE: Even if Edwards leaves, Wisconsin should be strong again at inside linebacker with Ryan Connelly and Chris Orr returning. Junior Andrew Van Ginkel turned into a playmaking force at outside linebacker late in the season, including a momentum-changing interception against Miami.

“It gives us a lot of confidence to know we can play with the big dogs in college football. Now we have to go back to work,” Van Ginkel said.

Spring practice will be important especially for young players to step up on the line and in the secondary. Keep in mind that coordinator Jim Leonhard already has a good track record of developing talent in the defensive backfield after just two years of experience as an assistant coach.

TAYLOR MADE: The next star in the Badgers’ backfield didn’t even begin the season as the starter. Taylor finished the year as a Heisman Trophy hopeful after setting a major college football record for a freshman with 1,977 yards rushing. An experienced offensive line figures to return mostly intact — so expect the run game to keep bowling over opponents in 2018. Sophomore Bradrick Shaw and junior Chris James were leapfrogged on the depth chart by Taylor but served as more-than-capable backups. Another freshman, Garrett Groshek, emerged as a hard-charging reserve.

PASSING FANCY: The most important development from the Orange Bowl for Wisconsin was the play of Hornibrook, who had an up-and-down year marked by productive play in the red zone and head-scratching interceptions. Hornibrook showed poise in the pocket, made impressive back-shoulder throws and fired darts into tight windows. While Wisconsin loses standout tight end Troy Fumagalli, the receiving corps is loaded with young playmakers including freshmen Danny Davis and Kendric Pryor, along with sophomores A.J. Taylor and Quintez Cephus.

Just the potential of more balance on offense could make defenses think twice before loading the box to stop Jonathan Taylor.

SCHEDULE: The 2018 schedule looks tougher, with five Big Ten road games including trips to Iowa, Michigan, Northwestern and Penn State, plus a visit to a resurgent Purdue in late November. More offseason questions lie on defense than offense for the first time in a while, though a fifth-straight season of double-digit wins is within reach behind the rock-solid run game and Chryst’s steady leadership.