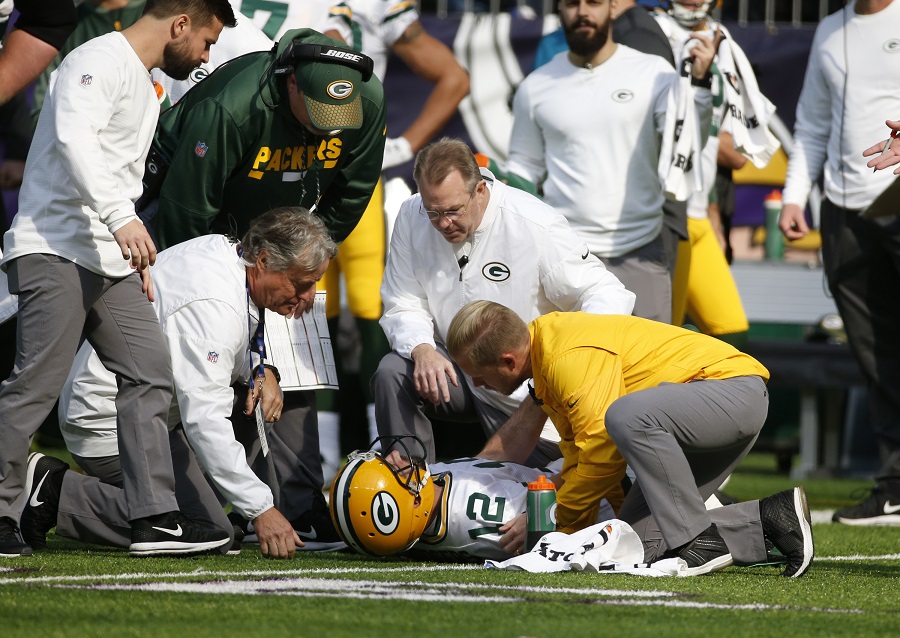 With Rodgers back, Packers OL must stave off Panthers’ rush

With Rodgers back, Packers OL must stave off Panthers’ rush

When Rodgers returns from a broken collarbone on Sunday against Carolina, he will take snaps behind an offensive line that has stabilized following an injury-filled start to the season.

It is more important than ever to keep the two-time NFL MVP clean and upright.

Coach Mike McCarthy “says your best lines are the ones that get to play next to each other week in and week out, to build that chemistry and consistency,” left tackle David Bakhtiari said this week.

After Rodgers, he might be the offense’s next most indispensable player. Healthy again after missing four games in September and October because of a hamstring injury, Bakhtiari has settled back into his role as trusted, blind-side protector.

They’ll need him to be at his best against Carolina ends Mario Addison and Julius Peppers, who each have 9½ sacks.

“David Bakhtiari is having a heck of a year,” McCarthy said before practice Thursday. “The ability to put him on a matchup — and he’s got a huge matchup this week … and have him to be successful gives us the flexibility to maybe help somewhere else.”

Instability up front hurt the Packers early in the season. Bakhtiari hurt his hamstring in the season opener and missed the next four games before returning in Week 6 at Minnesota.

With right tackle Bryan Bulaga also coming back that game from an ankle injury, that week marked the first time all season that the Packers had their starting offensive line intact.

Then Rodgers went down in the first quarter in the loss to Minnesota, landing on his throwing arm after taking a hard hit outside the pocket from blitzing linebacker Anthony Barr.

He’ll come back to face a Panthers defense that is tied for third in the league with 40 sacks and a familiar face in Peppers, who spent the three previous years in Green Bay.

McCarthy said that Rodgers “looked like himself” on Wednesday in the quarterback’s first practice since being medically cleared the previous night. Rodgers’ routine has built up gradually since he returned to practice on Dec. 2.

But it has been a while since his most recent live action, so Rodgers has said that he will probably need to get past his first pass and absorb his first hit before being able to settle into the game. A pass-rush segment in practice is about as close as Rodgers might get to the experience of eluding a blitzing linebacker before Sunday.

“Well, he’s had a chance to do it the last two weeks. So he looks comfortable,” McCarthy said.

Bulaga is now out for the season with a knee injury, though the rest of the line is intact. Bakhtiari, who went to the Pro Bowl last season, is healthy and playing well again at left tackle, while Jason Spriggs has taken over for Bulaga.

Along with guards Lane Taylor and Jahri Evans, and center Corey Linsley, the Packers have had the same starting five the past three weeks. The consistency has paid off in a running game that has grown more productive since Week 6 with rookies Jamaal Williams and Aaron Jones.

“I hate being out, but you can’t control injuries,” Bakhtiari said. “It’s good to get back and get the chemistry with Lane. The good thing is we were able to build off what we had last year, so it wasn’t hard to get back on (the same) page.”

The Packers have allowed 43 sacks, the third-worst mark in the league, though 19 came over the first five weeks while the lineup was in disarray. They gave up another four sacks against the Vikings.

The protection since then hasn’t been perfect, in part also because of Hundley’s acclimation to starting, but it has improved with Bakhtiari back to being the anchor.

“You see we missed him when he was gone,” McCarthy said. “When you talk about a system offense making a quarterback successful, when you get into pass protection, that left tackle is such a primary, important part of how we go about things.”

0
0   0
previous Pink joins list of stars performing during Super Bowl week
next Disney buying much of Fox, will help it compete with Netflix
Related Posts