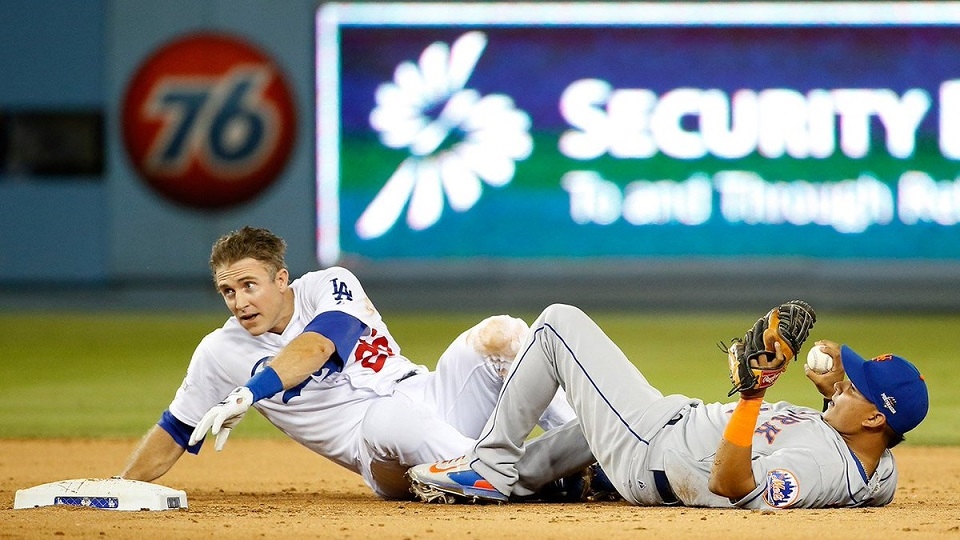 NEW YORK — If Mike Trout has ever been concerned about his safety when stealing a base, it hasn’t held him back.

For the AL MVP and many of baseball’s best baserunners, it might not matter anyway. In those split seconds after ball beats runner to the bag, decisions aren’t made with much calculation. If they see a way to the base, they’ll contort their body any which way to try to get there.

“When you look down there, you see the throw is going to beat you, you have to do something to try to escape,” the Los Angeles Angels star said last week.

Sometimes the result is a sweet, highlight-worthy slide . But as Trout experienced over the weekend, there’s a risk to letting instinct take hold in those spots — he tore a ligament in his left thumb diving into second base in Miami on Sunday.

Trout was set to have surgery Wednesday to repair the thumb, which put him on the disabled list for the first time in his career. It’s yet to be seen if the injury will add caution to Trout’s baserunning after years of brazen, crowd-pleasing evasions of infielder’s tags.

Trout has been a regular Houdini on the basepaths throughout his career, and he’s particularly adept at missing tags when he goes in headfirst. He gave Blue Jays third baseman Josh Donaldson the slip on a stolen base last September with one, flipping onto his right side at the last moment, whipping his left arm away from Donaldson’s glove and getting his right hand on the corner of the base.

Trout has also gone headlong into first base when needed, and he even risked his body last season against Toronto when he avoided both a catcher and a discarded baseball bat on a slide into home plate.

Those kinds of plays might give some managers ulcers, but not all skippers are keen on slowing down their most gifted athletes. Pirates boss Clint Hurdle has one of baseball’s slickest baserunners in Josh Harrison, who has a history of staying safe in creative ways . Hurdle has no intention of holding Harrison back.

{youtube}WxqU_cBPZcc{/youtube}
Harrison recently tested the bounds of his knee ligaments with a wild slide to avoid a tag at second base. While legging out a double, Harrison cut short his feet-first slide well shy of the bag by jamming his right foot into the ground. He popped into the air, and with his helmet knocked off, his legs splayed and his arms flailing, he dodged Nationals infielder Wilmer Difo and landed his left foot on second base. He immediately looked into the Pirates dugout and grinned at his stunned teammates.

{youtube}kb7hLYgDuVQ{/youtube}
Harrison attributes his ability to elude defenders to his older brothers and a narrow hallway in his childhood home.

“I’m sure I’ve done things like that running from my brothers, running, thinking I’m going to slide under a tag or something,” he said. “Just trying to get away by any means. They were bigger than me.

“I would never suggest anybody to do that,” he added. “But if you can handle it, you obviously know if you can.”

If a player is capable of pulling off something like that, Hurdle isn’t about to make him stop.

“Let men play the game. That’s what I’ve got,” Hurdle said. “He plays the game with his heart outside his chest. I’ve never seen anybody avoid tags like he does. I think it’d be a waste of my time telling him, ‘Hey, can you slow down? Can you be a little bit more careful?’

“That’s one of the things that got him to the big leagues. That’s what keeps him playing,” Hurdled said. “He’s been to an All-Star Game. It’s that zest, that effort, that energy to play. So, I’m just going to let him play.”

And of course, sometimes a player just can’t help himself, like when Blue Jays baserunner Chris Coghlan sent himself soaring over catcher Yadier Molina on a play at the plate last month.

Concern for injury? Not exactly. No time, really.

“I was thinking, ‘Since he’s down, why don’t you jump?’” Coghlan recalled.

{youtube}t3BDn2K6sgo{/youtube}
It’s not a play Coghlan has ever practiced, and not one he’s sure he could replicate. It only worked because his legs bounced off Molina’s back as the catcher stood, generating enough momentum for Coghlan to finish his flip.

Would he risk his body like that again? It probably won’t ever come up.

“You probably don’t see that for 100 years,” said John Gibbons, his manager.

Of course, some players have learned the hard way that perhaps they don’t have the body control to attempt such bold entries. Like when San Francisco’s All-Star catcher Buster Posey got a mouthful of third base and a scratch on his chin during an awkward, headfirst slide last August.

He vowed after the game that he’d only be sliding feet-first the rest of the season.

“I’ve always said that this game will humble you quickly,” he added.

AP Sports Writer Will Graves in Pittsburgh and freelancer Joe Harris in St. Louis contributed to this story.

0
0   0
previous Mets outlast Brewers in extra innings
next Kerr not well yet, but hasn’t ruled himself out for Game 1
Related Posts