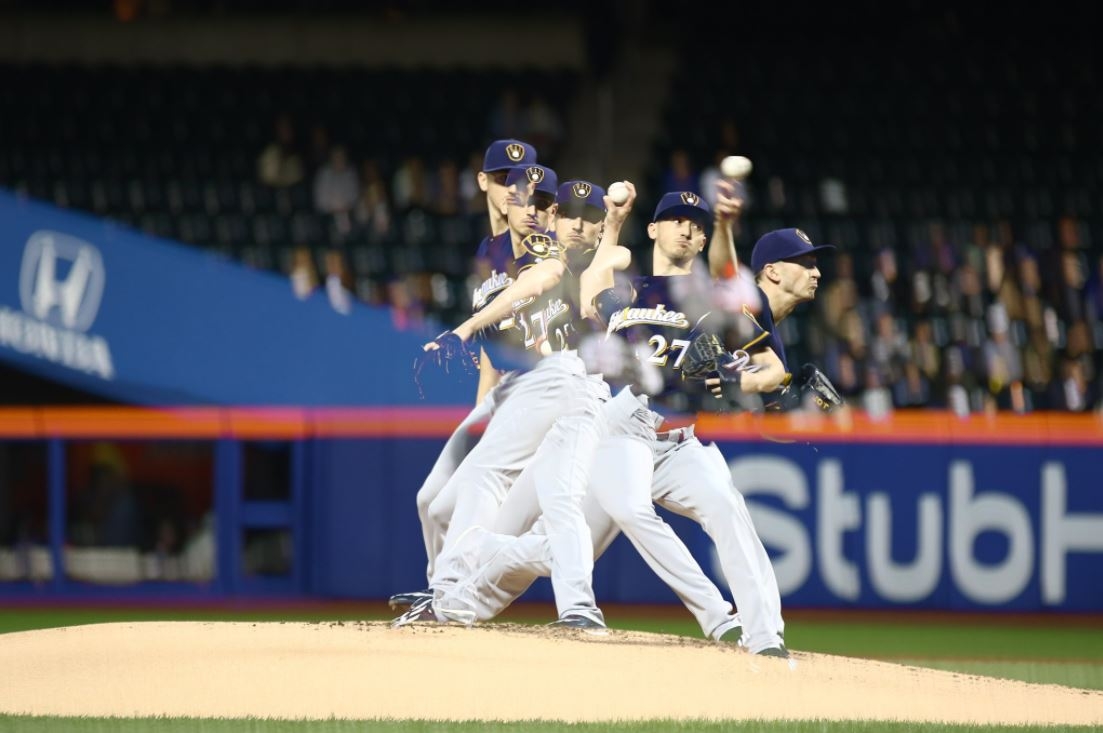 Davies had shutout through four before things fell apart

On a night with a Bogie-on-the-tarmac fog, the shortstop then backpedaled a half-dozen short steps, and the ball shockingly ticked off the webbing of his glove as two runs scored .

Only this misplay had a happy ending for the Mets.

Jay Bruce lined a game-ending single in the 12th inning , and New York rebounded to beat Milwaukee 5-4 on Tuesday night for its first three-game winning streak since May 3-6.

“I’m laughing now because we got the win, but that can’t happen in that situation,” said Cabrera, who matched his 2016 total of seven errors. “I just missed it.”

Then he saw Bruce getting dressed across the clubhouse.

Making his first major league start after seven minor league seasons, Tyler Pill held Milwaukee to one run and six hits over 5 1/3 innings and was in position to get the win.

Brewers starter Zach Davies took a 1-0 lead into the fifth but allowed consecutive doubles to Curtis Granderson and Cabrera, then walked Jose Reyes with the bases loaded.

Lucas Duda’s fourth homer in eight games, a two-run drive against Carlos Torres, extended New York’s lead to 4-1 in the sixth, but Milwaukee loaded the bases in the seventh with one out against Fernando Salas, and Blevins forced in a run with a two-out walk to Domingo Santana.

Santana did not run initially on Bandy’s popup and only made it to third when left fielder Michael Conforto picked up the ball after it dropped. Santana was stranded when pinch-hitter Jesus Aguilar struck out.

“I would say Santana and Bandy both didn’t run as hard as they could have,” Brewers manager Craig Counsell said. “I don’t think Domingo scores there. The ball didn’t really kick from Cabrera.”

Wily Peralta (5-4), making his fourth relief outing since he was dropped from Milwaukee’s rotation, allowed a single to pinch-hitter T.J. Rivera leading off the 12th. Conforto walked, Reyes grounded into a forceout that left runners at the corners and Bruce, who had been 0 for 5, singled up the middle.

“We don’t get too worked up about too much,” Bruce said. “We let everybody else do that.”

Josh Smoker (1-2) allowed two hits and struck out four over three scoreless innings , matching his longest big league outing, to cap a strong effort from a beleaguered Mets bullpen that has blown 10 of 21 save chances.

“There’s been a lot of games where we think we’ve got it wrapped up and all of a sudden we can’t stop somebody,” manager Terry Collins said. “This is one we needed to have.”

Smoker was demoted to the minors for two weeks this month and made a pair of starts at Triple-A Las Vegas.

“I think it was huge to get down there and get to throw my off-speed pitches more,” he said.

A day after his 27th birthday, Pill allowed runners in every inning and stranded six in scoring position. He hit Keon Broxton with a pitch and Travis Shaw, jammed by a changeup, blooped a two-out RBI double just over a leaping Duda at first base.

Pill made his big league debut Saturday and took the loss after relieving in the 10th inning at Pittsburgh.

“I attacked the hitters with all my pitches and I was able to pitch out of jams when I needed to,” he said.

Milwaukee, the NL Central leader, lost for the seventh time in nine games. The Brewers went 2 for 15 with runners in scoring position and stranded 14 on a night when Counsell made three double switches to maximize his four-man bench.

Davies gave up two runs and six hits in five innings. He was angry plate umpire Manny Gonzalez didn’t call a 2-2 pitch at the knees to Reyes a strike in the fifth, then threw a fastball in the dirt. Coming off the mound, Davies told the ump, “It’s on you.”

“Yeah, 3-2 I made a bad pitch and I ended up walking him, but personally I don’t believe it should have gotten there,” Davies said. “I was watching on TV and late in the game Broxton got rung up on a pitch that was 3 inches inside, so it’s tough.”

Eric Thames singled in the first and tripled past Bruce in right field in the fifth. Thames had been hitless in 19 at-bats and 2 for 27 with a pair of singles since returning on May 18 from strep throat.

Salas, who turned 32, lined a single to right in the sixth for his first big league hit. He had been 0 for 4 in eight seasons.

Cuban OF-INF Ernesto Martinez Jr. will receive an $800,000 signing bonus as part of his minor league contract with the Brewers, a deal announced last weekend.

Mets LF Yoenis Cespedes did not play for the fourth straight day after appearing in the first game of an injury rehabilitation assignment with Class A St. Lucie. He has been on the DL since April 28 with a strained left hamstring and felt soreness in his right quadriceps while running the bases Friday.

RHP Jacob deGrom (4-1) starts Wednesday night after beating Pittsburgh on Friday and becoming the first Mets pitcher to reach the ninth inning this year. RHP Junior Guerra (0-0) will be making his third start this season for the Brewers.