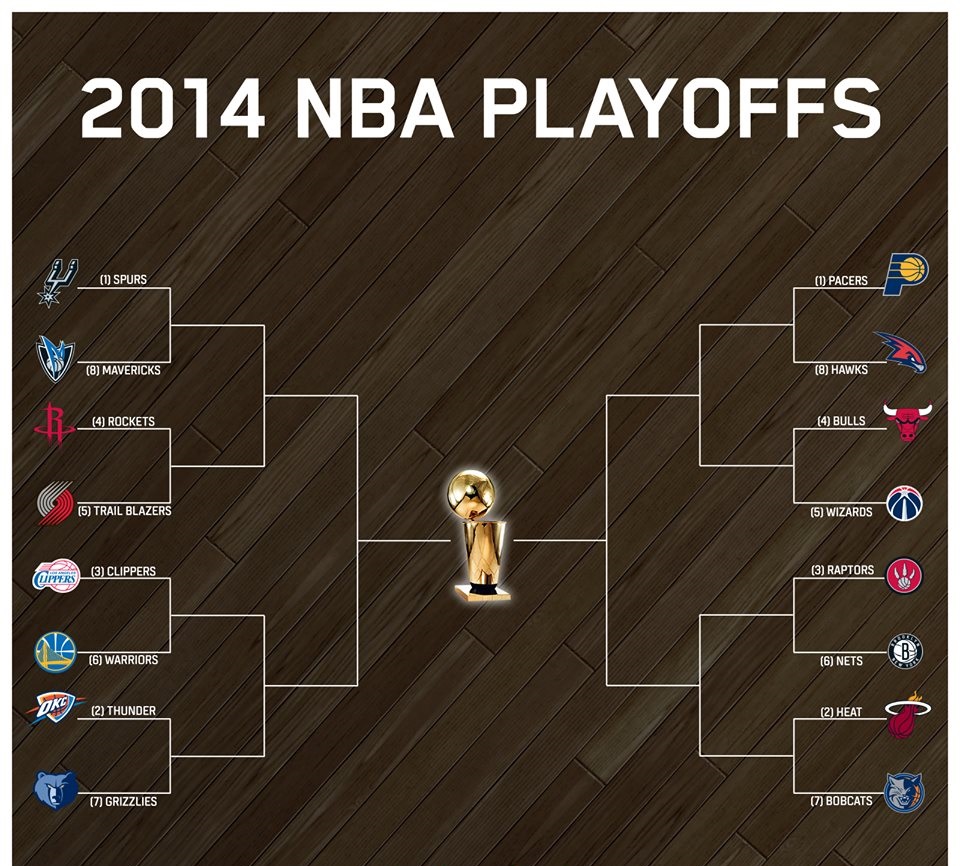 Here’s a look at the matchup for the first round of the NBA Playoffs in order of most-to-least exciting series to watch.

The Trailblazers started the year looking like one of the best teams in the league and then they reverted to what everyone thought they would be – average.

But Houston doesn’t play great defense on the perimeter and Portland likes to chuck 3s.

But on the interior, Houston plays good defense. Dwight Howard and Omer Asik will give LaMarcus Aldridge trouble every minute he’s on the floor. Aldridge can pull them out of the lane with his jump shot, which would give Portland an opportunity to get to the basket, but they usually just settle for 3s.

Meanwhile, the Rockets, led by James Harden, can get to the basket and get to the free-throw line. And in the playoffs, that’s the difference, because it’s usually a foul fest.

This used to be an intriguing matchup, but then Andrew Bogut broke some ribs and David Lee pulled something and now neither will play.

What that means is Steph Curry will shoot 45 times a game and, as fun as that sounds, that doesn’t win playoff basketball games.

The Clippers did just the opposite of Golden State and got healthy (J.J. Reddick/Jamal Crawford). That will give them momentum heading into the second round.

This is a tough matchup for Oklahoma City, but one they can withstand. Only one of the towers in Memphis will give the Thunder trouble – Marc Gasol – and he’s not a game-changer. Gasol will never go 40-20 on a team, and that’s what it would take.

Randolph has played horribly against the Thunder and they don’t have any outside shooting to keep OKC from doubling down. Defensively, Memphis is solid – as usual – and could maybe contain Kevin Durant and Russell Westbrook to an extent, but between a team containing those two vs. containing a Gasol-Randolph duo, money would be on the OKC pair going off.

Everyone seems to be handing this series to the Nets. Why? Because they put  a ridiculous amount of money on any player they could get their hands on? Because they beat the Heat four times this year? Because Kevin Garnett and Paul Pierce used to be good?

Usually experience wins in the playoffs and the Nets have an abundance of that. But at what point does the experience just turn into old age? Pierce and Garnett haven’t been relevant in years. Neither has Joe Johnson, who is a glorified 3-point shooter now. Deron Williams is their best player, but he’ll have his hands full with, perhaps, the best point guard in the league this season, Kyle Lowry. Plus, Williams is no longer that tough PG that made him a max-contract player. Hasn’t been that guy in years, either.

The Raptors may just run the Nets into the ground. Watch someone like DeMar DeRozan get some recognition over a re-tread like Johnson.

This would seem a fun matchup of Old Dirk vs. Old Tim in one last hurrah. The problem is Old Dirk hasn’t beat Old Tim in the last two seasons.

And Old Tim’s team is comprised of a lot more pieces than Old Tim … or even Old Tony and Old Manu. There’s young Kawhi and Patty, guys named Tiago and Boris, and gunners named Marco and Danny.

Meanwhile Old Dirk’s team is made up of other oldies like Vince, Shawn, Samuel and Jose. None of who can either matchup with or dominate their other half on the Spurs. Not even Dirk, but I still give Nowitzki one win on sheer will. And maybe Monta gets to the line 15 times in that game to help. Funny how he suddenly became relevant this season – not settling for 15-foot jumpers – on a team with some leadership and a winning tradition.

The Bobcats strengths offensively are the Heat’s weaknesses – the ability to contain point guards and centers. That’s exactly what Charlotte has in Al Jefferson and Kemba Walker.

But let’s get real, this is Charlotte It’s the Bobcats’ second-ever trip to the playoffs. And they’re playing the Heat. They maybe squeak out a win, but probably not. As good as Big Al can be, Kemba can’t.

This seems like an intriguing matchup, because the Wizards have weapons.

John Wall has been great this season, and he’s stellar on defense. Problem is, Chicago’s point guard is a center, and Wall’s not guarding Joakim Noah. So, his defense is rendered useless.

The Wizards have a player at every position and then some. Bradley Beal is an up-and-coming SG, Marcin Gortat and Nene are solid up front, Trevor Ariza has resurrected his career this season and Wall has made the leap into a true point guard that gets everything going.

Problem is, the Bulls are notorious at disrupting anything a team does. Nothing says the Bulls win this series, except they simply win. They win with defense and toughness, which is the textbook for winning in the playoffs.

The most interesting thing about this series is the fact that Indiana almost completely melted down the last few weeks of the season.

Playing Atlanta may help them get back into the flow and they sweep, or they remain lethargic against a bad team and it takes a game or two longer to move on. It’ll be the former, if for no other reason than the Hawks have zero advantage at home to even win a game (the fans that do come like to show up in the second quarter some time).