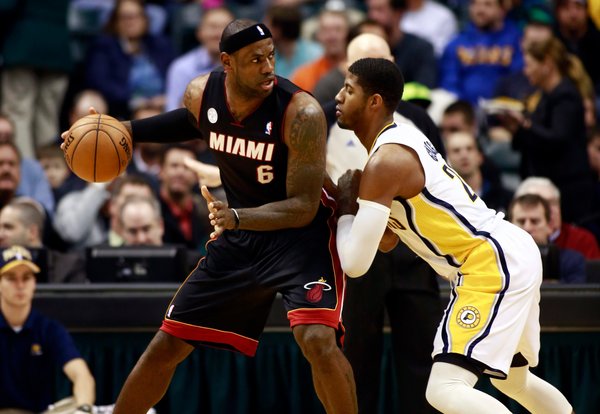 The stupid thing here would be to pick the Miami Heat to win the series and go on to win the title.

Wait, that would be the smart thing to do and that will most likely happen, but I want to pick the Indiana Pacers to win the Eastern Conference Finals. I really do.

Problem is, Miami is kind of tough and wins with defense … except Chris Bosh. He’s a pansy.

The Pacers won the regular-season series 2-1.

Problem there, they won the first two games of the series big and the last one kind of seemed like a statement game for the Heat, while everyone was talking about how the Pacers had their number.

The formula for the Heat to win is simple: Stop Paul George. And the Heat are fully capable of doing that.

And when James gets tired (I know, he doesn’t get tired) … when James gets bored with playing defense on George, then they can sick Shane Battier for a spell. Then Mike Miller. Wait, what? I’m kidding. Nobody is sicking Mike Miller on anyone defensively. Ever.

George went 2-for-11 from the field and 2-for-7 from beyond the arc in the 105-91 loss to the Heat on March 10. Everyone else was rather effective. David West was 7-for-10 and Roy Hibbert went 7-for-14, though he only had four rebounds. He still managed to outrebound Chris Bosh by one.

The Pacers aren’t deep. Tyler Hansbrough and Ian Mahinmi play about 10-15 minutes off the bench on the front court. D.J. Augustine will come in and chuck up some 3s. Sometimes he makes them.

The Heat seem deep with guys named Ray Allen, Battier, Rashard Lewis and Miller on the bench. Only Allen is really effective offensively. Battier can hit some corner 3s and maybe play a little defense, but the Heat aren’t really that deep either.

They don’t have to be when James can play the entire game if needed. But the benches in this series kind of offset each other.

The interesting factor here is Dwayne Wade is hobbled with a bone bruise in his right knee, but will play. If he isn’t effective, that puts everything on James and Bosh.

Sadly, Bosh may be the deciding factor in this series. James will do what James does … and maybe he’ll do what Super James does and Indiana won’t have a chance. But Bosh has scored well in all three games – notice I said scored – averaging 17 points on 58-percent shooting. He’s averaged a whopping 3.7 rebounds, which is baffling to me for a guy who is 6-foot-11 and long.

If the Heat decide George isn’t scoring, and that seems the completely obvious thing to do, then all the pressure is on West and Hibbert to keep them afloat. West could probably handle that, since Bosh may be guarding him. West averaged 22.7 points on 66-percent shooting in the three games against Miami.

In the postseason, Hibbert has averaged 14 points on 47 percent shooting, up from his 11.9 points and 44.8 during the regular season.

So, he’s come to play, but is that the worst thing that can happen for the Pacers? It’s like when the world’s worst 3-point shooter hits a 3-pointer to start a pick-up game. He then proceeds to shoot 3s the rest of the day and never hits the rim and you wonder what the hell he’s thinking.

Hibbert may now see himself as an offensive threat and command the ball in the post, where he has a minimal repertoire of moves.

Then again, who will guard him? Bosh? Chris Andersen, who wasn’t on the Heat in their first loss to Indiana? Joel Anthony?

Maybe it doesn’t matter. Hibbert will do minimal things in the post against minimal defenders and they just play to a draw.

Clearly I spent way too much time talking about Bosh and Hibbert in a series that features James and George. Funny, the two most compelling players in the series are named James and George.

What this series really boils down to is whether or not George can shoot a decent percentage from the field and carry the team that was the best defensively in the NBA.